With a late night return flight scheduled to the ‘Land of Song’, it seemed a little rude not to squeeze in one more of Edinburgh’s culinary delights!  Dining slightly earlier than usual and supposedly* with plenty of time on our hands, a last minute reservation request ensured we secured a table at a restaurant which had come highly recommended.

A contemporary Milanese Restaurant and Pizzeria, Amarone is located in Edinburgh city centre.  Situated on the corner of George Street, I am guessing that the venue may have once been a bank (going by the fact they have a private dining room in the vault ha ha!) – however if that’s the case I would have gladly put my life savings in there just to admire its architecture!  A vast floor space with high ceilings combined with modern black and red furnishings, and monochrome imagery made for an elegant and airy dining space.  However, at this point I was clearly interested to see whether it was more sophisticated style over substance.

Dining on a Sunday afternoon, Amarone had both their usual menu but also a Sunday Lunch Menu available.  Appearing to be good value for money at £15.95 for 2 courses and £18.95 for 3 courses, the Bargain Queen in myself naturally opted for this choice.  With a range of six different starters on offer, the ‘Parfait di Pollo’ caught my eye – a home-made chicken liver parfait with apple chutney. 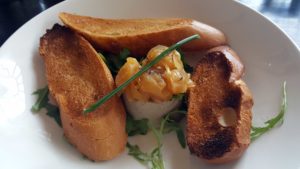 While it wasn’t the prettiest of dishes; for once with three large hunks of (slightly ‘over-toasted’) bread available, the usual disaster of not having enough available surface to spread your parfait on, was thankfully avoided!  A rich chicken liver pâté with a smooth consistency, it combined well with the apple chutney for a tasty (and slightly filling) starter.

Heading onto the main courses, and we had opted for a couple of different dishes on the menu.  Up first was one of the three available veggie options the ‘Girasoli Funghi e Panna’.  A dish of fresh circular pasta filled with sautéed mixed mushrooms and served with Grana Padano truffle cream; it was similar to ravioli but flatter and ‘sun shaped’.  A bowl of delicious al dente pasta, and while I couldn’t really taste the mushroom as it was obliterated by the garlicky truffle cream – the rich, garlicky truffle cream was actually the outstanding feature of the dish! 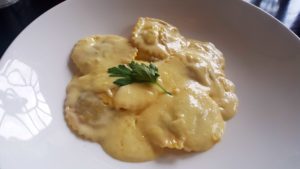 The other standout main course was Amarone’s ‘Pollo Funghi e Pancetta’ – chicken breast with a mushroom and pancetta cream, and served with sautéed rosemary potatoes and vegetables.  A generous portion, the chicken breast was well-cooked and beautifully moist with certainly more evidence of mushrooms than it’s partner in crime on the table!

More than likely; swift but polite service makes this a perfect eatery for a spot of (boozy) lunch.  I certainly wouldn’t mind popping back to experience a few of the other dishes on the menu.

Would I recommend Amarone, Edinburgh?

Yes – while I am still exploring the vast number of culinary delights on offer in Edinburgh (with another foodie trip planned in August…woo hoo!), the dishes offered at Amarone were good value for money, and it should certainly be considered as an option if your stomach is rumbling while in the city centre!

*N.B. (more a note to self) – next time you think you have a shed load of time to catch a flight, remember to take into account the bus service from Edinburgh city centre; sprinting for a plane (after naturally purchasing some Edinburgh Gin in Duty Free!) is not so clever…neither is graciously/deliriously collapsing in a sweaty heap at check in – ha ha ha (totally worth it for the Rhubarb and Ginger Gin-based Liqueur though!)