Ok…so as I may have mentioned in my ‘about me‘ blurb, this blog is prone to a bit of randomness; and I bet, based on some of the posts, you may have thought it was pretty random anyway!  The Octopus Diaries is first and foremost about dining out, however sometimes I come across (yes…ok so I go out of my way to seek out) dining or drinking experiences that I really can’t categorise but have to write about, simply because they are so damn weird, wonderful or uniquely random.

Now it’s not uncommon that while scouting around on the Twittersphere, I come across a few fantastically strange things.  However as foodie social sites go, the concept of #cheeseonpost for some reason, amused me no end – primarily because the initial words out of my mouth were (and apologies here) WTF would you ever do this!  Bread, cheese and meat are pretty staple ingredients in my kitchen (as they are in probably most people’s kitchen *or veggie alternatives), and so evidently if I have a sudden cheese toastie craving I can make one pretty darn quickly!

While this isn’t quite a dining out experience, naturally my intrigue around this concept was just too much and so with PayPal details in hand and a voucher code, I headed off to their site to order my first ever cheese toastie through the post!

With a relatively easy to navigate site you are smoothly taken through the buying process, with initial options to either purchase your toasties on a subscription basis or give ‘someone special’ the ultimate in toasted gifts.  Depending on your choice, you can then inform them whether you prefer sweet or savoury or both, whether you are vegetarian, if you have an aversion to any fillings and so on.  It’s all pretty simple and as I found out, quite fun too.

The level of marketing creativity that has gone into Cheese Posties is impressive, and I loved The Cheeseboard page displaying all the different posties.  Favs included #12 Peanut Butter Jelly which apparently tastes like putting on warm underwear straight out of the drier (okaaaaay) and #30 Fight in a Farmyard which they assure you will taste like Peppa Pig & Djali’s delicious secret lovechild! (fine by me, I’ve seen enough Peppa Pig over the years to disturb me for life)

On placing your order, you are informed that your Cheese Postie will arrive on a Thursday morning…not so great if you order on a Wednesday and are craving your toastie there and then!  Nevertheless, on Thursday morning it’s sad to say but I was pretty excited by what may (or may not) come through the door, so much so that I camped out by the letterbox (ok that bit was a joke…am not that bad).  My post also doesn’t arrive particularly early, so at 12.15pm I’d nearly given up and resorted to the caramelised onion hummus and pitta bread that was calling from my fridge.

However by 12.20pm, I was the proud owner of one Cheese Posties box 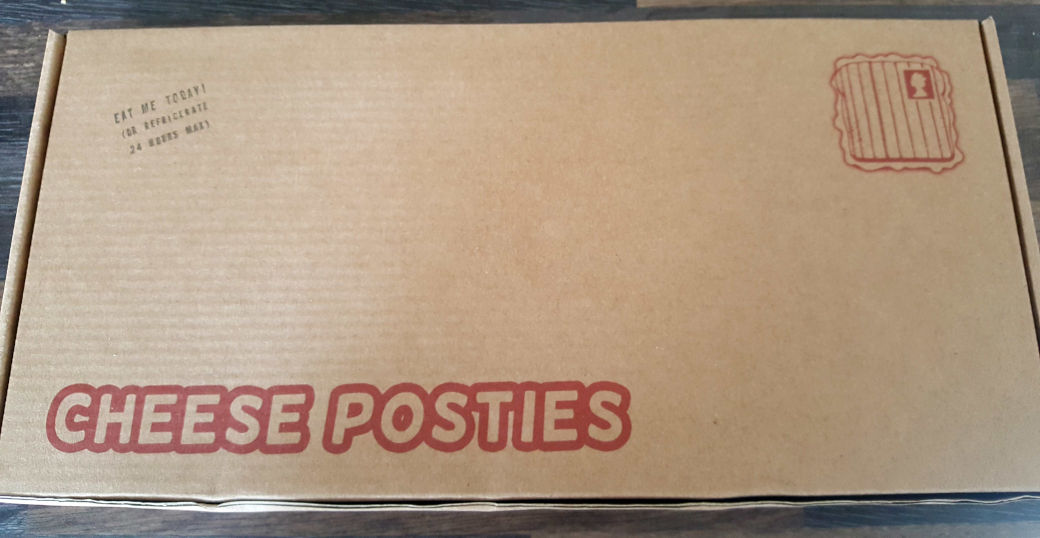 In a world where the majority of my post is either my credit card bill, NI tax requests or junk, I will say that if someone sends you food in the post it is a much more pleasurable experience than finding out you owe money!  Excitement contained, and proceeding cautiously in some kind of ‘Indiana Jones and the Raiders of the Lost Ark’ style manner, I proceeded to open the box…

I had received #9 Cheesy Garlic Bread, which had an Ooze level of 2, a Quirk level of 3 and Structural Integrity and Political Correctness levels of 10 (N.B. I had no clue at this point) it also apparently should taste like ‘being lovingly asphyxiated by puppies!’

Was it Octopus proof?

I ask this question, as based on some of my previous ‘cooking’ mishaps (baked beans in a stir fry was a classic) I am an enthusiastic cook but definitely not going to make it onto Masterchef anytime soon!  Needless to say with limited cooking intervention required and combined with the knowledge that I can make a cheese toastie at 2am while half-cut, I figured my level of culinary knowledge would be sufficient to get me through the toasting process.

On inspection of the box, each of the ingredients were individually wrapped, and I had a fantastic set of ‘A Dummies Guide To’ style instructions on how to activate ‘cheeseporn’.  If I am going to be completely honest I had a good giggle, again very creative and I loved the volcano section although I was tempted to change point 4 of the instructions to ‘question what on earth possessed you to think purchasing ingredients for a cheese toastie through the post was a good idea!’ 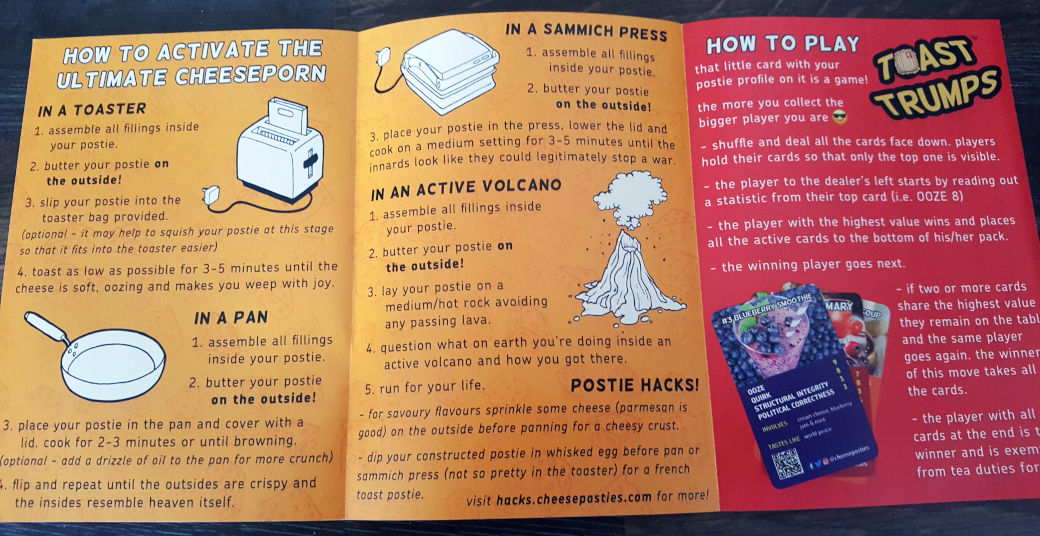 Anyway ploughing on in the process; it was time to assemble the sandwich.  At this point I felt like I should have ‘scrubbed up’ for a part in a hospital drama. I can only liken it to some kind of operation, opening each package, garlic and herb butter on one side of the bread and tomato sauce on the other (could have done with a bit more of that), sprinkle mozzarella and then butter the bread on the outside. 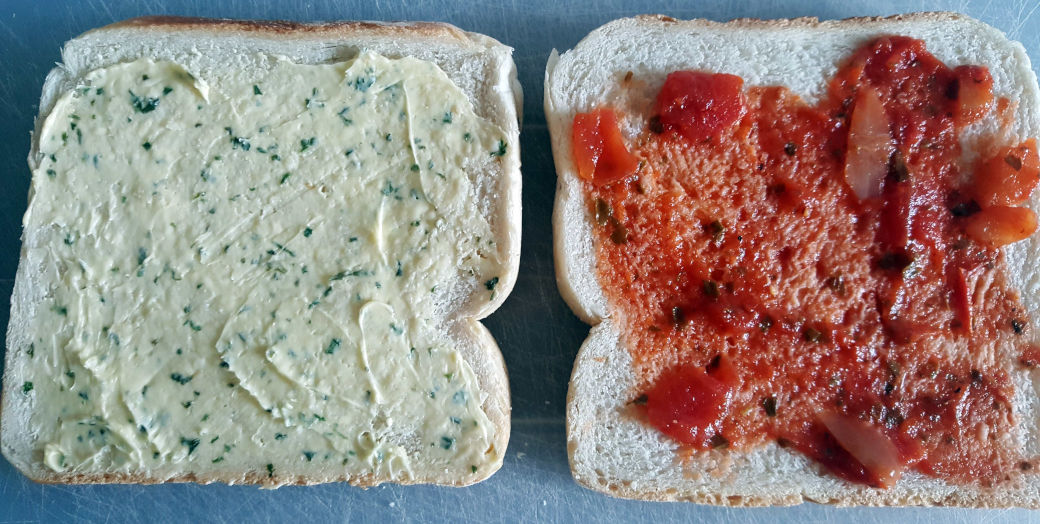 Now I am a bit of a kid at heart and I like getting messy, but seriously if you have ever tried to stuff two pieces of thick white bread with filling and buttered on the outside into a toastie bag, it can only be likened to attempting to put one of those fold up tents back into its bag – my hands were covered in butter and slippery (a few choice words came out), mozzarella escaped, it got stuffed back in, (a few more choice words came out)…with the sleek Casualty style operation clearly over, the toastie nearly ended up on the other side of the kitchen in one terrible two’s style tantrum!

Needless to say I got it in, in the end (make of that what you will!)…4 minutes later…and I will say as toasties go it wasn’t a bad one.  The cheese had melted and apart from the fact that I now had breath to scare the most persistent of vampires, and had received more of a friendly lick rather than being asphyxiated by puppies, the overall toastie was a resounding success!

Would I order again?

Weirdly, that would probably be a yes!  I’m not sure I would personally take out a subscription, although receiving a different toastie once a month could be fun/an expensive treat *delete as appropriate.  However, I have to say this would make one awesome foodie gift and I would love it if someone sent me one in the future…hint hint!