We’ve all had that feeling when we’re desperate for those sought after tickets; a concert, a festival, as it turns out – a restaurant.  Waiting for the clock to roll over….tick, tock, tick, tock. Quietly tapping…refresh, refresh.  Not so quietly thinking…WIFI, you dare fail me now.  Followed by the inevitable rush of endorphins as you hit send on your payment details, and after what seems like an eternity, receive the confirmation through…”We are looking forward to welcoming you”.

Nine years ago I made a list; a wish list of sorts.  And on it, forty things I wanted to achieve, or experience by the time I hit the foreboding 4 0.  It has evolved over the years; at points it has been put on hold, and life dictates that some items will take longer to accomplish than the prescribed time limit.  This, of course, ‘is my list’, so naturally a number are restaurant-related – some of which are being saved in consideration of the upcoming celebration of my fourth decade on this planet.  Yet, I will readily admit that I struggle with the phrase ‘patience is a virtue’, and so when the subject of returning to New York came up, my thoughts naturally went to another list item – to dine in a 3 Michelin-starred restaurant’.

It goes without saying that ‘the city that never sleeps’ has an abundance of prestigious, Michelin-accoladed establishments – 72 in total.  Yet as I sit here, and somewhat sarcastically note, with just 5 restaurants currently holding the top 3 star award (there are only 5 in the UK, as a whole) – it was clearly going to be a tough decision.  Or was it?  Because if you write a blog about dining out, surely your ultimate wish would be to experience, what had a year prior, been regarded by ‘The World’s 50 Best’ as the number one restaurant in the world? 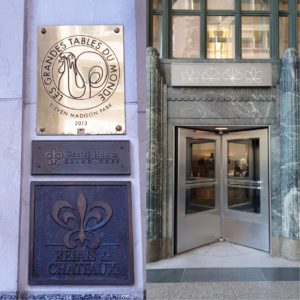 Following a period of closure for renovation, in 2018 Eleven Madison Park ceded its throne to Osteria Francescana in Modena, Italy; instead dropping to, quite frankly a still not too shabby, number four in the occasionally controversial ’50 Best’ list.

Headed up by Swiss-born Chef Daniel Humm, who commenced his culinary career at age 14, and earned his first Michelin star at 24.  Daniel became Executive Chef at Eleven Madison Park in 2006 when the restaurant was owned by Danny Meyer’s Union Square Hospitality Group. In 2011, he became co-owner with Will Guidara, who continues to run the front of house.

Offering two dining options; if you’re looking to experience a shorter, and marginally less expensive meal, the bar offers a five-course seasonal tasting menu, in comparison to the dining room’s eight to ten plates.  And it’s the bar in which I find myself sitting.  Not because we are in any rush – five-courses takes us the best part of 3 hours, but purely in the fear of mortally-offending my bank account, which must quake in its boots every time I google the word “Michelin”.

Don’t get me wrong the main dining room is nothing short of an interior designer’s dream.  As you enter through the revolving doors, it’s not just the welcome air-con from the outside humidity, that leaves you breathless.  Floor to ceiling height windows allow the light to ethereally enter the open space, enhancing the natural colour palette of the dining room.  While the Eleven Madison Park’s updated and plush décor leaves you under no illusion that a considerable amount of thought, time and money has been invested in this renovation.  Yet, the bar area is a more relaxed affair.  That is not to say it is any less elegant, but comfort is the key, and crisp white tablecloths are not to be found here.

If your wallet allows, there are some four figure choices in the slightly overwhelming War and Peace of wine; however after trekking six blocks in 91°F heat and heels, a refreshing apéritif is a welcome sight.

A cocktail will set you back, on average $19, however you’ll soon realise the famous price tag is more than worthy.  These are grown up, sophisticated drinks; there are no zombies, billowing smoke and flames are not an option – well not that I witness, and any sexually suggestive cocktails have thankfully been asked to leave the building.  Glasses of sparkling fino sherry, lemon, thyme and white balsamic, and Highlands Añejo tequila, with celery root, Tuaca, Aleppo pepper and not forgetting a branded iceberg, pack a haze-inducing punch, which softens the edges and lowers the shoulders.

The time has come…

Since taking a seat, a small string-tied white box has been begging to be opened in the centre of the table.  To this point, I have shown restraint.  For those that know me well, I think we can all agree, this is a monumental feat in itself.  Inside…black and white savoury cheddar cookies, sandwich a sweet apple filling.  Usually found in American diners, it’s a playful and delicious start to the menu.  More amusingly, I will admit the thought pops into my mind that I have just paid half a month’s salary for essentially, posh Mini Cheddars. 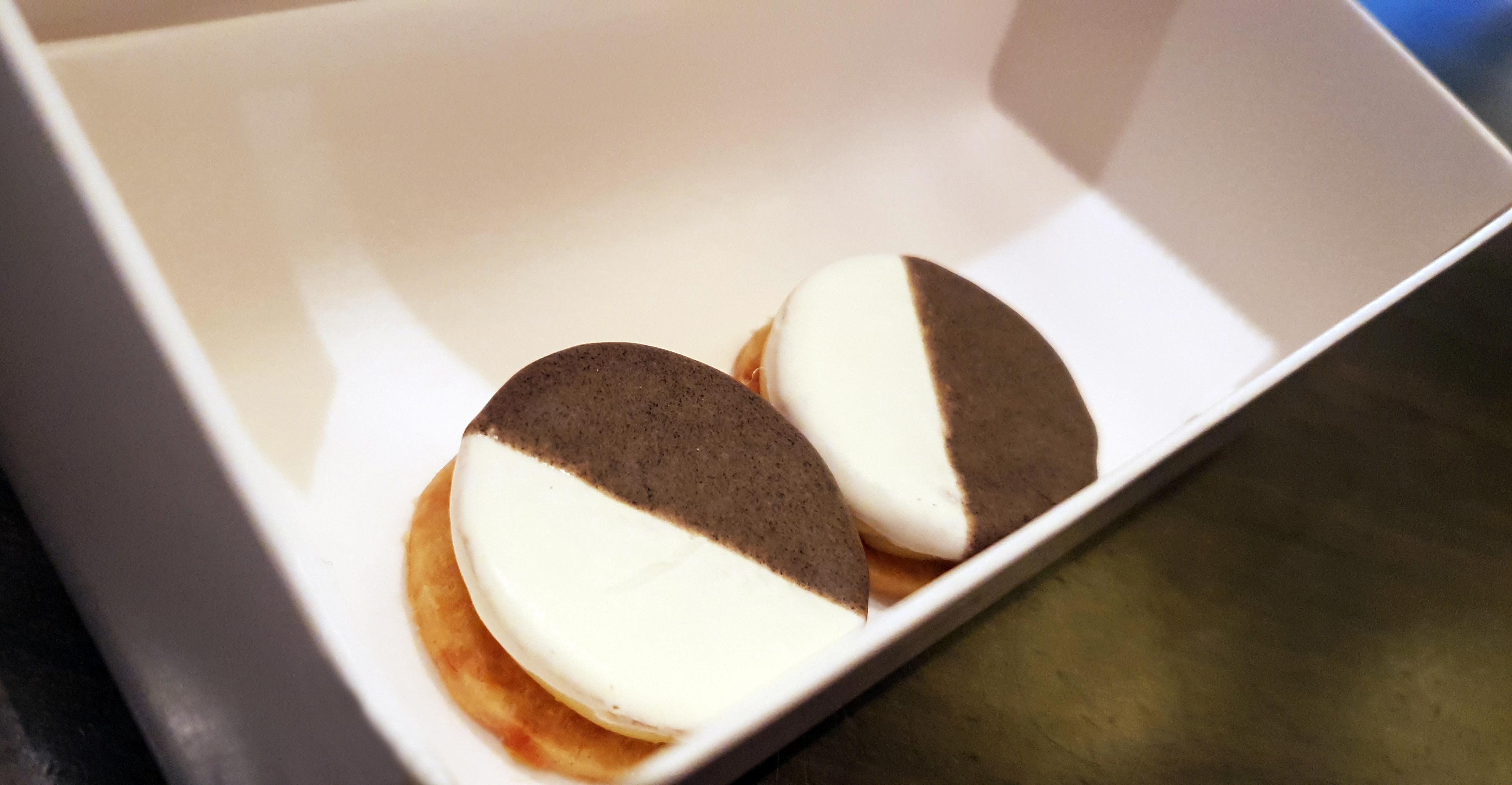 The first course is non-negotiable, and I’m eternally grateful.  For if the contents of this solitary branded tin, set the standard of the dishes to come, then it’s certainly not too early to roll out the phrase ‘mind-blowing’.  A take on the classic New York originating brunch – Eggs Benedict – I am at a loss to the precision and level of innovation that is placed before me.  A runny, pickled quail’s egg yolk interspersed with sweetcorn, coats delicately smoked sturgeon.  Topped with a generous dollop of caviar and an aerated Hollandaise sauce, you would imagine this couldn’t get any better…

You would be wrong… 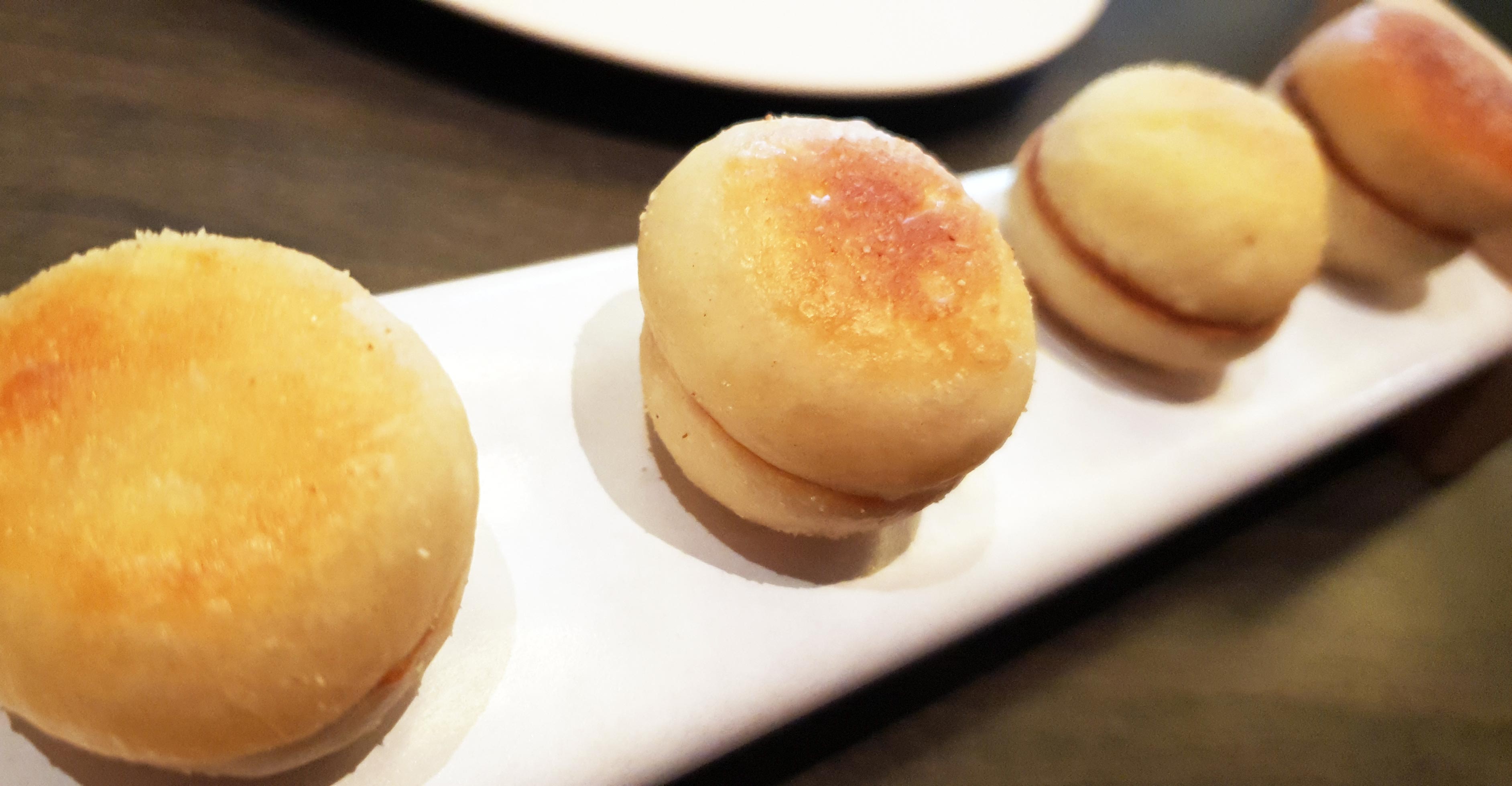 As four warm, lightly toasted mouthfuls of English muffins are introduced to the party; to smother, to fill, to crave a couple more? It occurs to me that brekkie at 1.30pm should always be this pleasurable.

The introduction of a choice arrives in course two.  “Will that be foie gras or crab salad?”  From my own perspective, when it comes to these ingredients, a decision is not an option.  “We’ll have one of each please”; a running theme that continues throughout the meal. 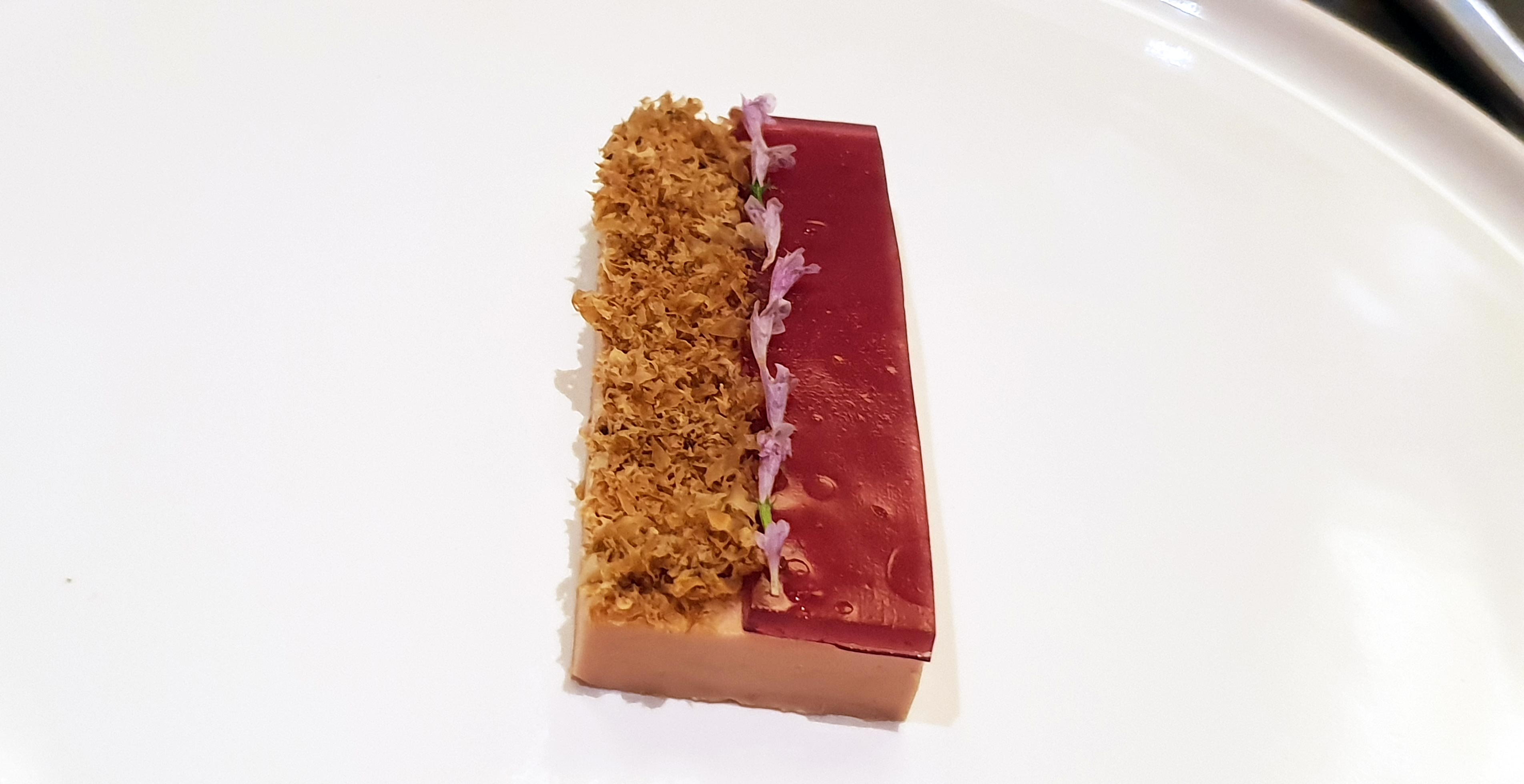 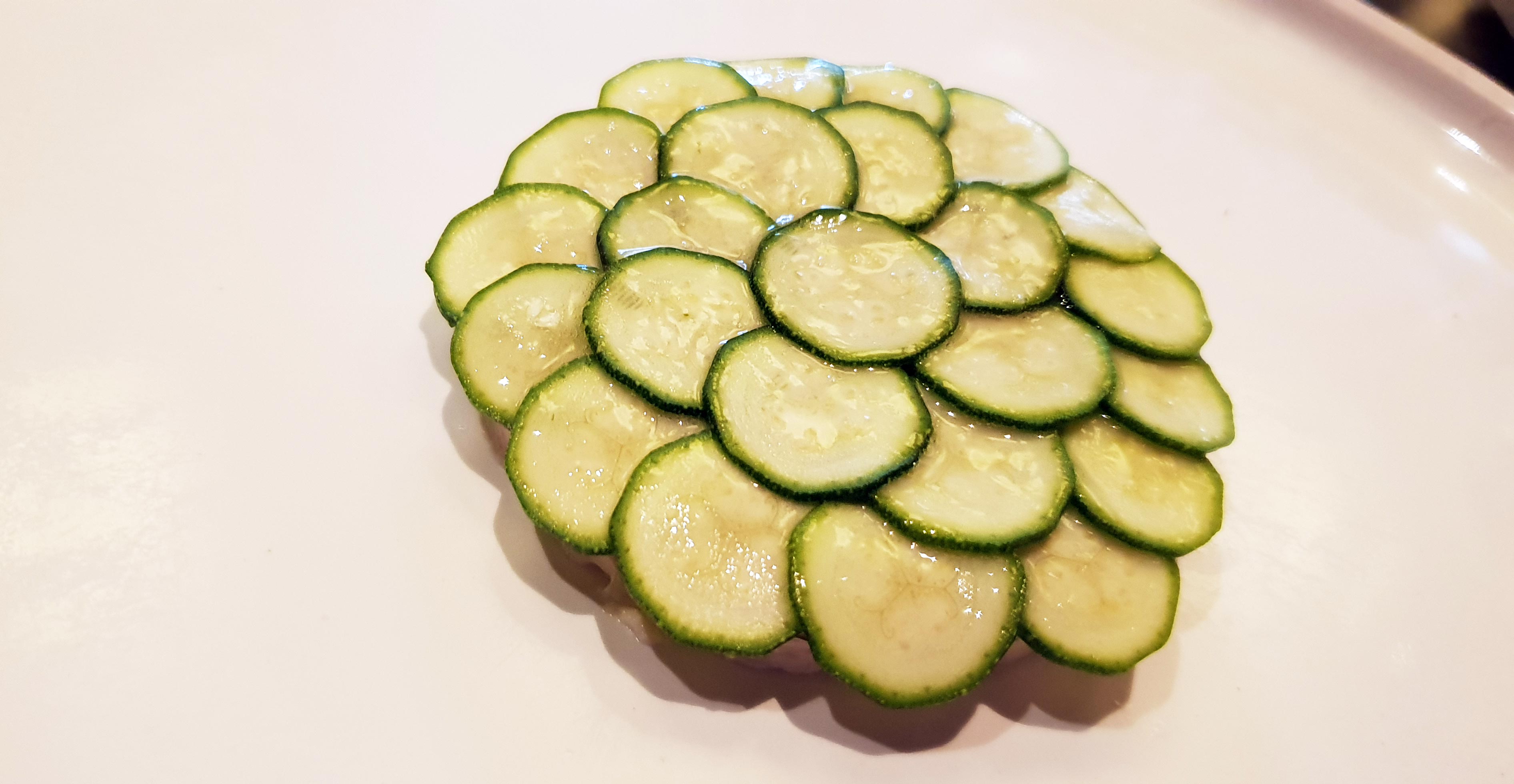 Crab salad with zucchini and lemon

Again it’s the precision that astounds.  We really are in ‘Plating Tweezer Central’ here.  Two elegant, minimalistic dishes, beg to be admired; almost to the point where eating them becomes a secondary factor.  Almost.  This course is all about texture and delicate flavours, both of which are in abundance on these plates.  The foie gras is smooth and buttery with subtle hints of lemon and mint; while the beautiful crab salad is soft and elegantly dressed with spherical layers of lemon glazed courgettes, which ensure that when the light-hearted enquiry comes from the front of house – “well…which did you prefer?”- the crab sneaks the title of top dish. 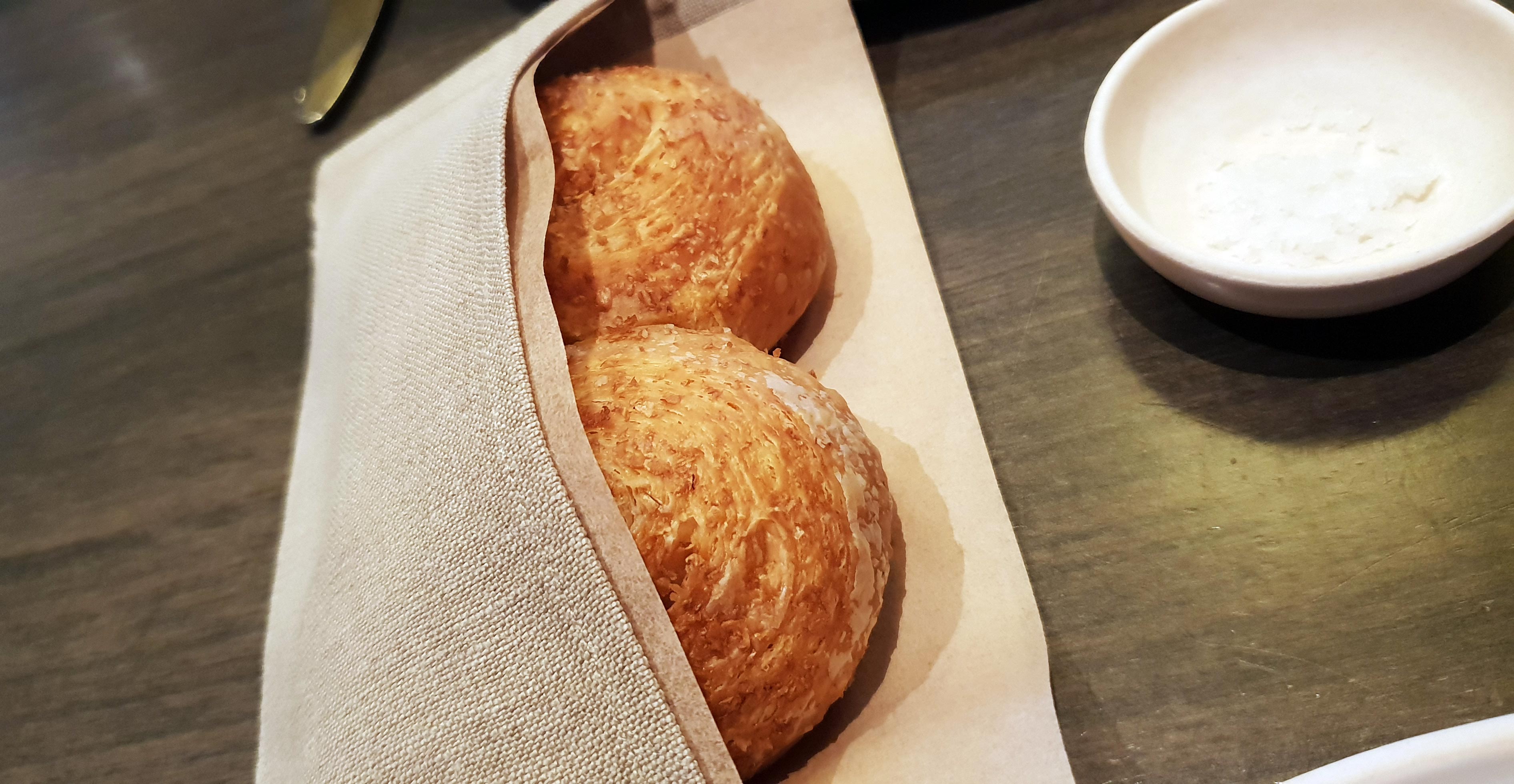 Uncharacteristically, the bread puts in an appearance at this point.  Tucked neatly in a linen envelope, two home-made buns of almost flaky brioche – I’d like to say similar to Brioche Feuilletée, are topped with Vermont cheese shavings, and accompanied with salt and butter.  Warm and decidingly addictive, two portions are an absolute must.

The word “lobster” only needs to be uttered once, and course three is again a foregone conclusion.  Two small parcels of grilled meaty lobster arrive wrapped neatly in greens and garnished with cilantro.  In retrospect, I find it amusing that in a period of 2 weeks, this will be the first and last time I have any veg on this American Adventure.  Plated on a perfectly seasoned glossy broth that you can see your face in, this is the only dish that unfortunately slightly underwhelms.  Don’t get me wrong it is good, but in comparison to the dishes that have gone before, and as it turns out, yet to come, I find the lobster itself, a touch bland. 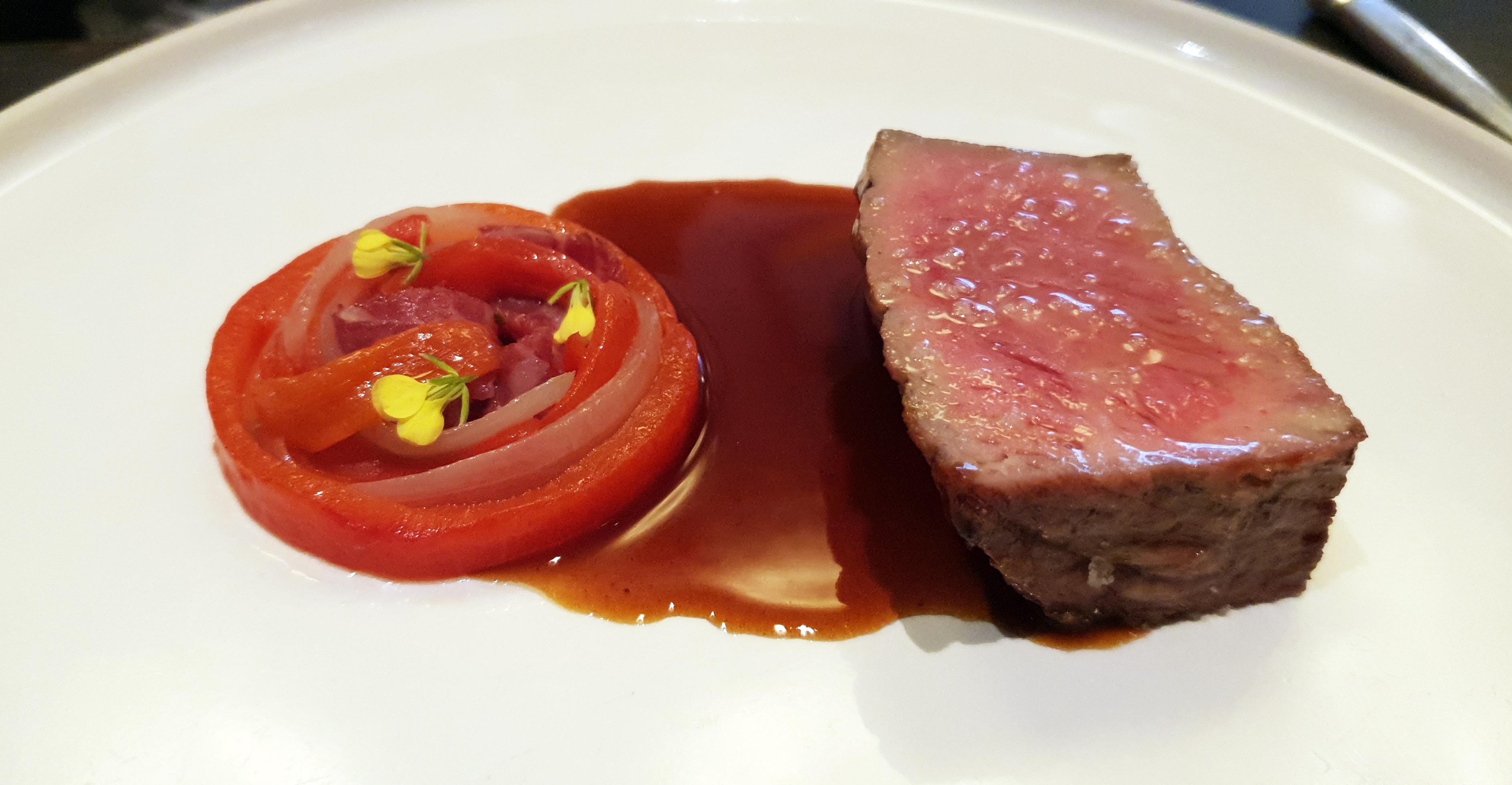 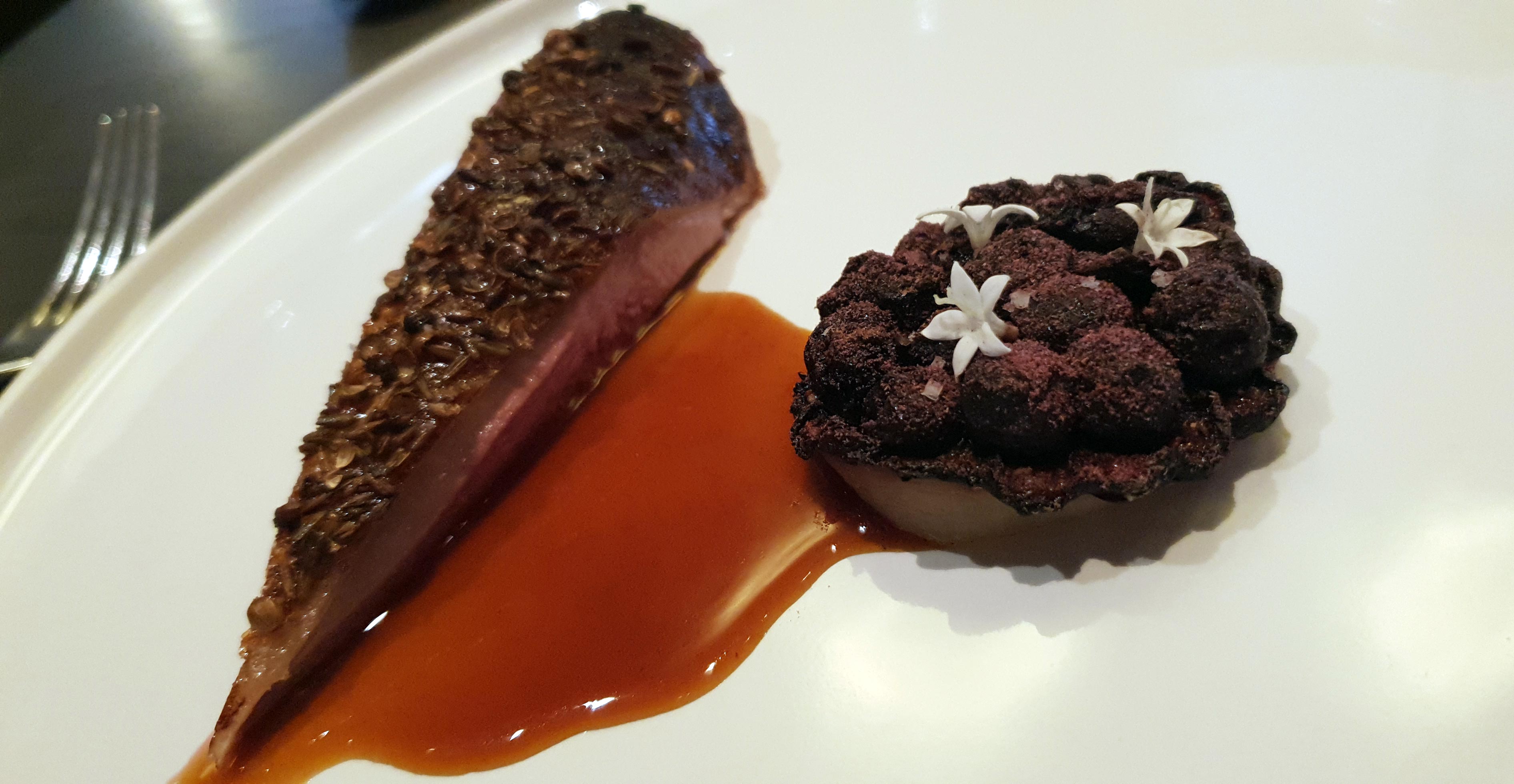 Honey and lavender glazed duck with blueberries and onions

I’m all for freedom of choice, but when the main courses are duck and 140 day old rib eye steak, again the necessity to order both appears to go without saying.  Accompanied with sautéed pepper and onion rings, and a glossy, rich beef jus; while presentation verges on simplistic, the dish screams technique.  To say that the steak is cooked perfectly would be doing it a disservice.  This is something special.  Yet while I label the steak as such, it quickly becomes apparent that the duck is going to blow its bovine friend out of the water.  And I quickly have to face the realisation that I will probably never experience another duck dish this exceptional in my lifetime.

For this is Chef Daniel Humm’s iconic dish; the only plate to have continually remained on the Eleven Madison Park menu since 2006.  Evidently perfected over time. the tender, medium-rare lavender honey-glazed duck, with a thick crust of szechuan pepper and fragrant spices including cumin is a dish of pure beauty.  Paired with chanterelle mushrooms, blueberries and a duck jus, it’s rare I am left speechless by food.  But for this, I choose to take a vow of silence, instead replacing words with a look of endearment to the empty plate in front of me. 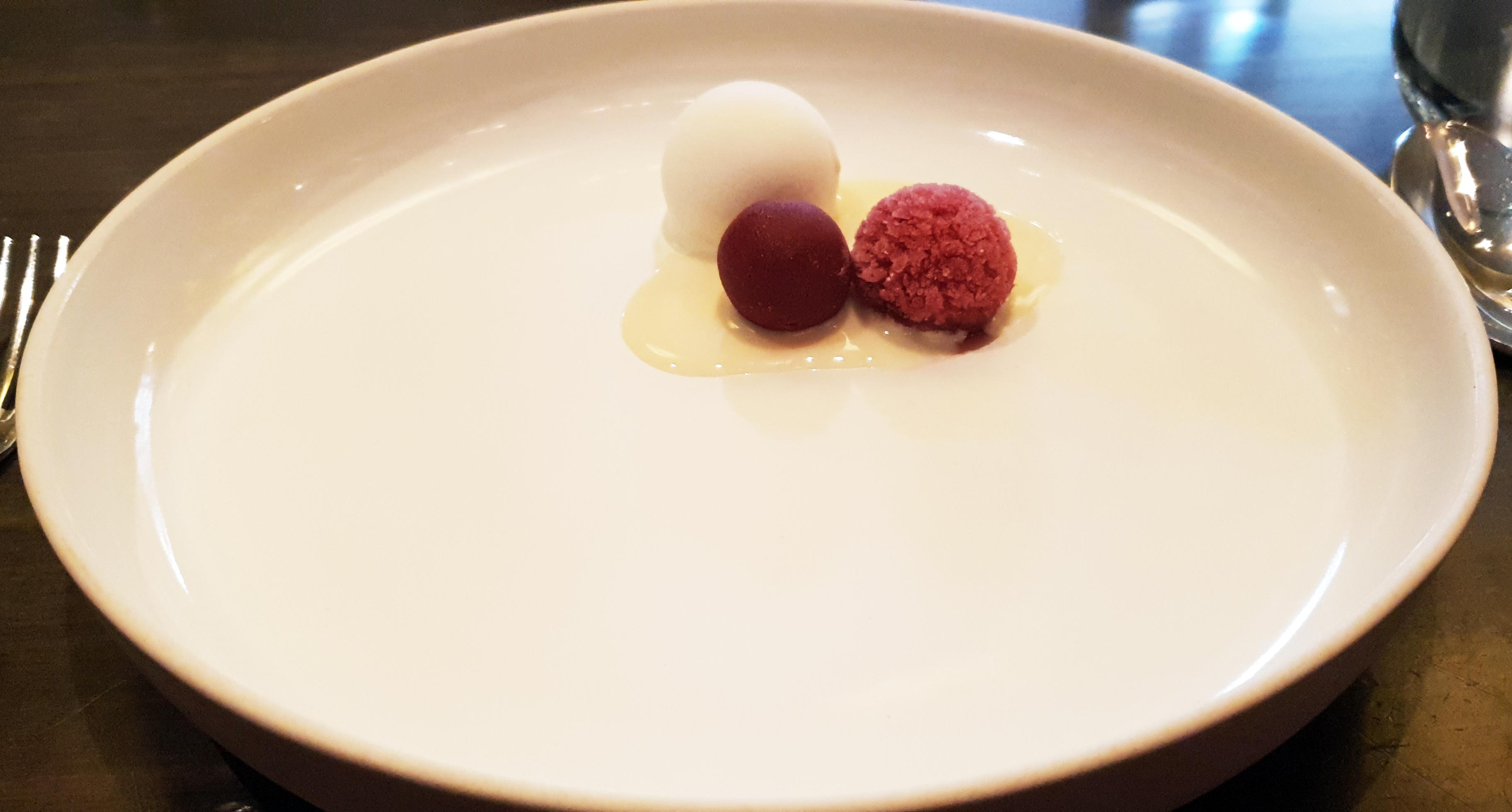 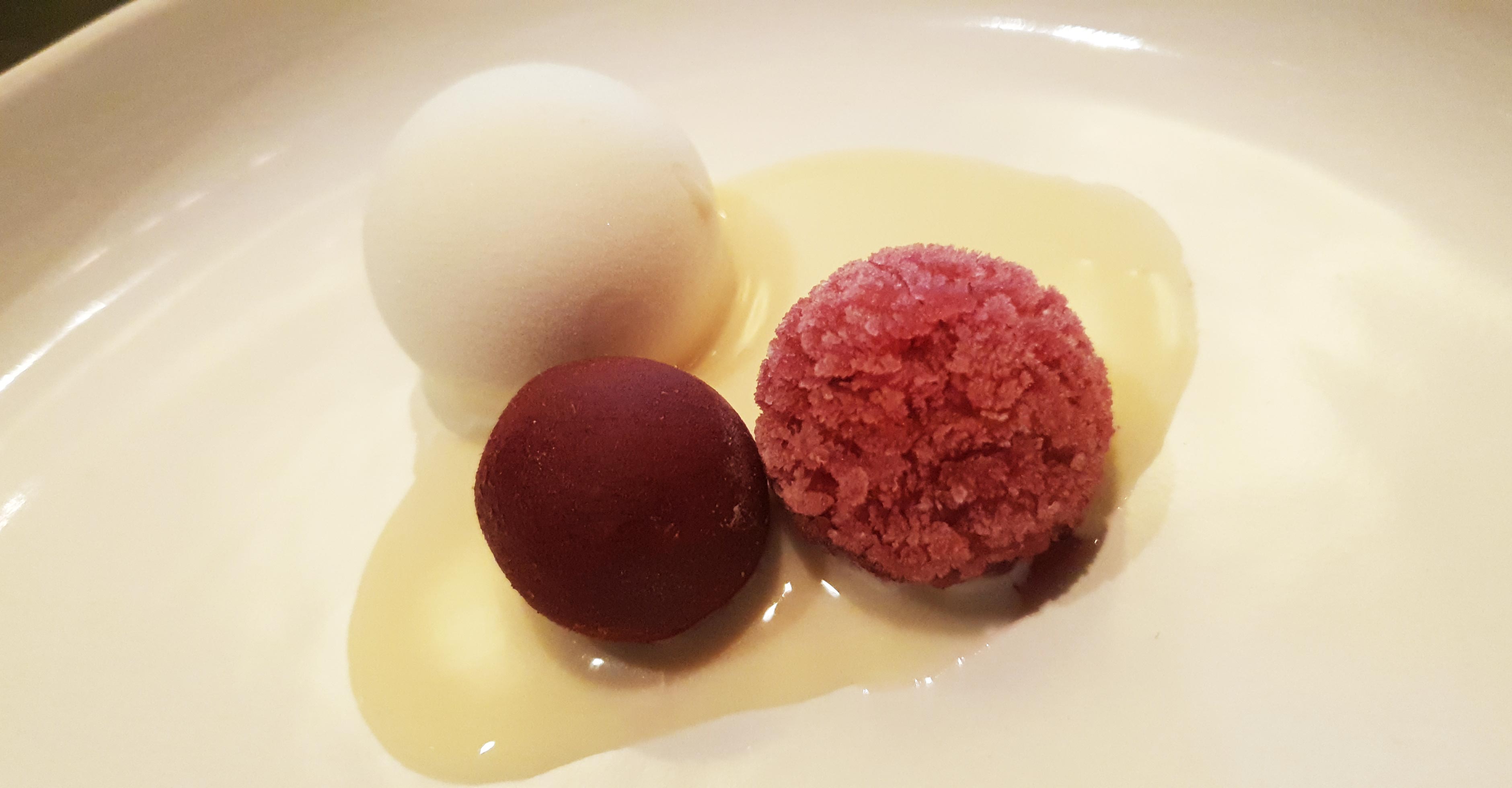 Blackberry ice cream and granita with caramelised milk and lemon 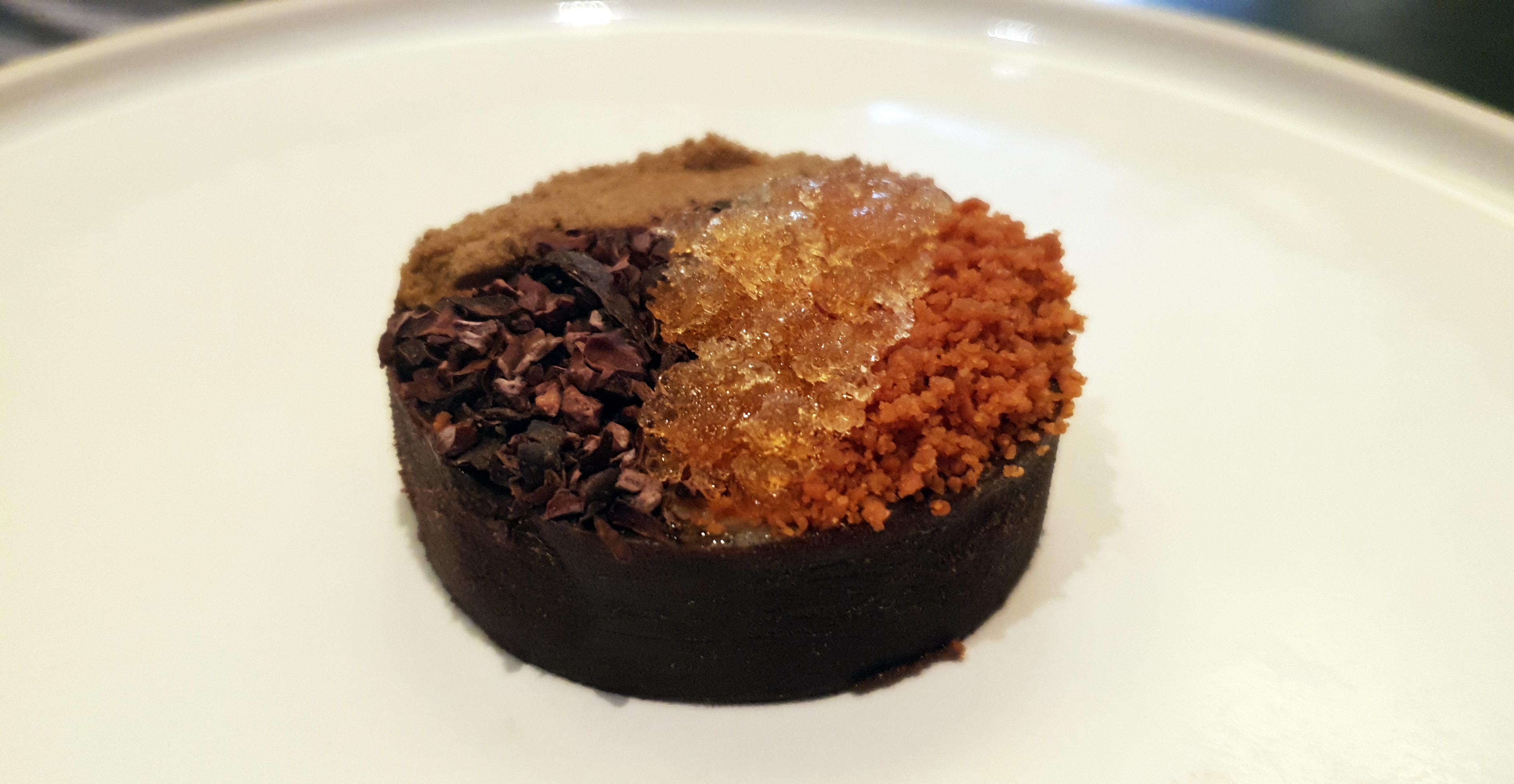 Desserts take two forms, but display similar positive attributes – light, creamy, rich and indulgent.  Sarcastic comments aside, primarily – “do you think they need a bigger dish?”, I mean even I’m going to air on the side of ridiculous, minimalistic plating, the blackberry dessert is insanely good.  While the pom-pom of granita acts as a palate cleanser, the caramelised milk ice cream is dense and creamier than I am expecting; a reminder more so of kulfi from the Indian subcontinent.  A pool of tart, creamy lemon sauce pulls the three balls of loveliness together, albeit I sit here debating whether a couple more would have completed the juggling act.

I could have rolled out the adjective luxurious a number of times throughout this visit to Eleven Madison Park, but in this chocolate pud I’ll settle on its use.  Presentation wise the chocolate sorbet impresses.  Taste and texture wise it astounds.  Offering a rich combination and wonderful balance of cocoa and coffee, it truly was a 3-star dessert.

Completing the ‘Eleven Madison Park experience’, two dark chocolate covered pretzels, which suspiciously taste like the ultimate in animal crackers, hang elegantly off, what suspiciously looks like a posh mug stand.  Accompanied with an exclusive Californian-produced apple brandy, that packs a punch of alcohol to take your breath away; it’s the perfect way to end this spectacularly refined meal.

As I sit in the bar, I know I am lucky to have experienced Eleven Madison Park.  Can I really afford it? – no.  But life is short, a point that is to be reinforced later on in this trip.  And in between the perhaps mundaneness of everyday activities, these shining beacons are here to keep us sane and smiling.  For this is a restaurant for special occasions. For lists.  To be indulged, appreciated and respected for what it is.  An exceptionally beautiful, perfect piece of culinary escapism.