Never one to stay on the ‘beaten track’ when travelling, naturally when a friend offered to give us a guided tour on a recent trip to their home island of Cyprus…the kind offer was met with vigorous nodding of the head and maybe a few whoops and cheers.  Not having visited before, and speaking virtually no Greek, it gave us the perfect opportunity to explore parts of the island with a local (historian and amazing tour guide as it turned out!) and translator in tow!

Needless to say we had a fantastically informative day and the scenery (at least in the South West of Cyprus) is stunning – if you haven’t been and plan to go in the near future make sure you head up into the mountains.  The roads are a little ‘interesting *scary – ha ha’ but the scenery is breathtaking.  Anyway this is a food blog, so I’ll leave those insights to the travel bloggers of the world!

It was in the latter half of the afternoon when we pulled in at the village of Lofou.  Situated in the Limassol District, it is named as such due to it being built on a hill between the mountains – a beautiful village you can check it out here www.lofouvillage.com.  However, we were here for one thing only…

With a number of eateries available, we were actually lucky to sit down.  Easter Monday celebrations had brought local families out and large groups were all sat dining together, making for a lovely atmosphere in such a small village.  Based on our friend’s recommendation we headed for the Kamares Taverna; a traditional taverna, on offer was a 12 course Meze feast for 19€ each.  I say feast – a traditional Cypriot Meze can consist of as many as 30 small plates or ‘little delicacies’ – argh 12 was more than enough! 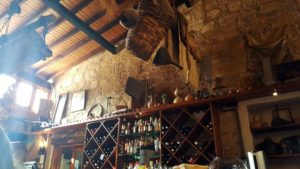 It was at this point I was quite glad we had our friend translating, as while the front of house team gratefully had a certain level of English, it was so much easier to understand exactly what we were eating.  Plus as a bonus, also gain a little knowledge on traditional (and not so traditional!) Cypriot Meze dishes. 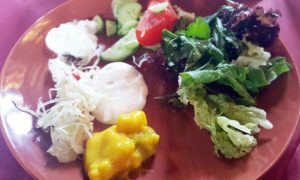 As with most traditional Mezes we started with a fresh salad, with various tasty dips including Tahini, a smooth and creamy paste made from ground sesame seed; Tzatziki, cool cucumber flavoured yoghurt with garlic; Taramasalata, salted and cured fish roe; Greek Fava, a yellow split pea dip and a beautifully smooth Hummus. 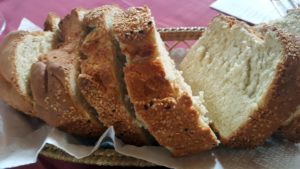 Freshly made white bread with a sesame seed crust

It is customary to dip either pitta or home-made white bread into the dishes. 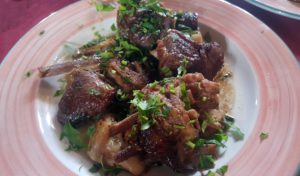 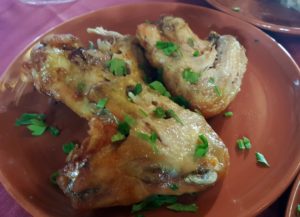 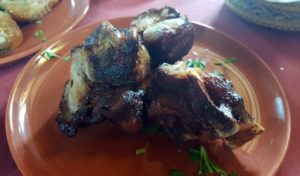 Well cooked and the lamb and chicken just fell apart. 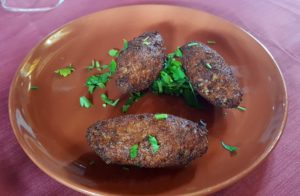 Combined with potato and parsley and deep fried – these were put simply…amazing! 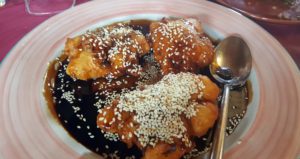 Deep-fried Halloumi with Caro and honey

This confused us a little, as usually halloumi is grilled in a Cypriot meze – however I think it was a Chef’s special.  Hmmm – I also personally think it may be one to keep to him or herself – way too sweet for my liking, which was a shame as I love halloumi.

A traditional Cypriot dish of pasta with cream and baked in an oven, this is especially popular during Cyprus’ Easter celebrations. While it wasn’t made from the more traditional pasta tubes – the béchamel sauce and cheese ensured that this was a delicious dish, but certainly not one if you were watching the calories! 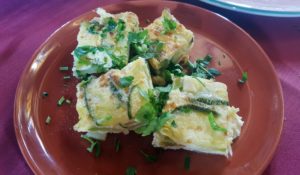 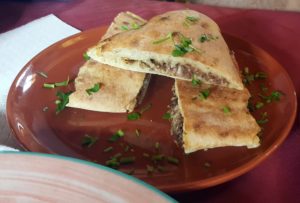 At this point, I gave up and even though astoundingly there were a variety of desserts on offer, unfortunately I couldn’t partake in this feast any further.  Octopus…over and out (and in a gluttonous heap under the table – ha ha!).

Would I recommend the Kamares Taverna?

If you can find it…yes.  I will say the limited Tripadvisor reviews are a little mixed, but personally I enjoyed the range of dishes on offer and it was great to be able to experience a truly local Meze.