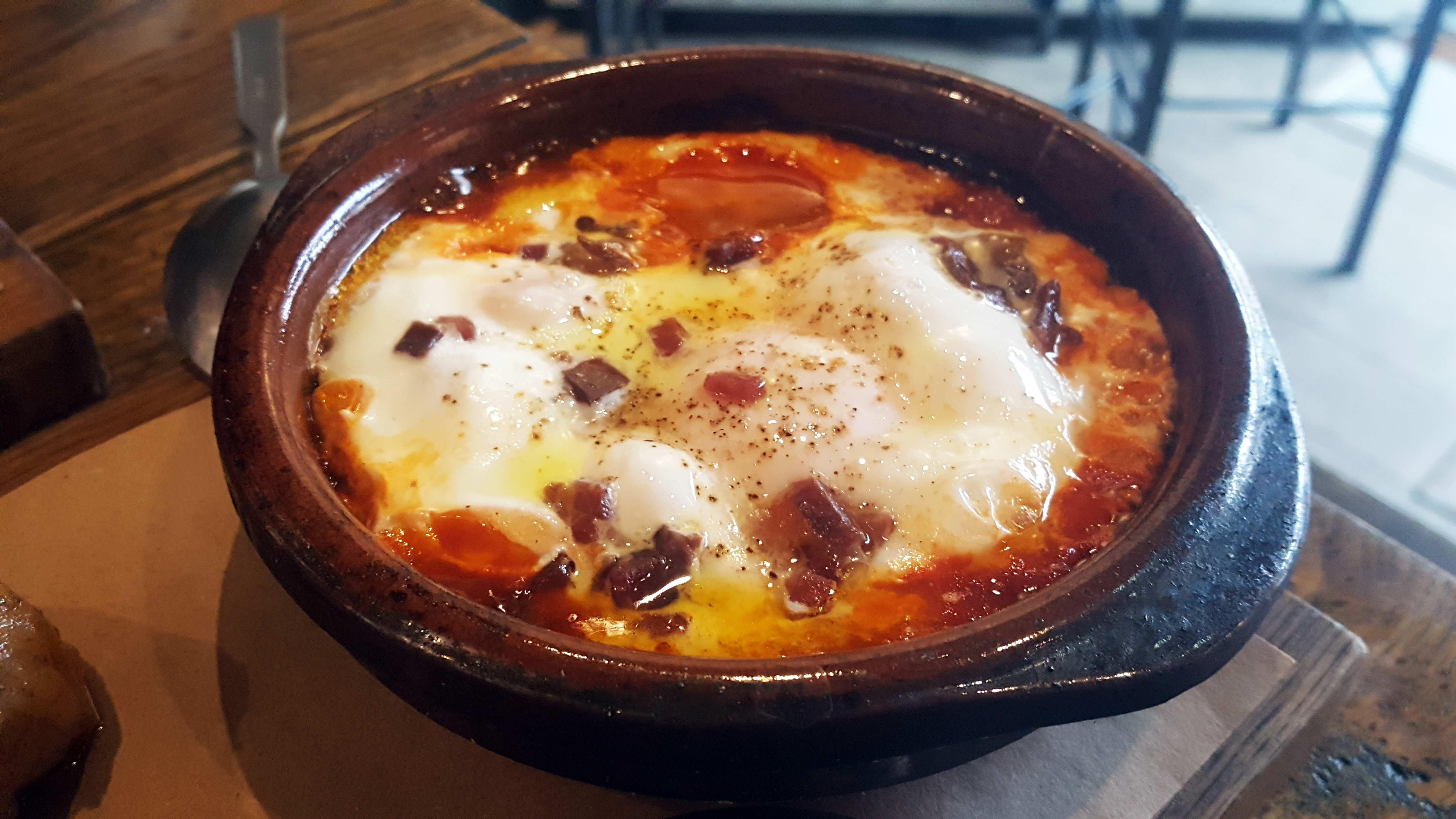 Passion.  A word that is frequently thrown around in the culinary world.  Adopted by many a restaurant, you can usually spot that conspicuous marketing phrase ‘we are passionate about using local, seasonal produce…; or ‘our chef is passionate about the dishes they create…’, featured somewhere in the website spiel.  And to an extent it’s true; with long, grueling hours that pull chefs away from their friends and families, and a need for a constant level of creativity and consistency, this is not a career choice for the faint-hearted, and a ‘passion’ for the job is a prerequisite.

Yet never have I seen such passion so openly demonstrated, than that shown as I sat and watched the live-stream of the 2018 Michelin stars being awarded at The Brewery, in London.  Years of hard work and dedication – displayed through an array of emotions, were exposed for all to see, as chefs and owners received their prestigious award on that stage.  And while all were wonderful to witness; it was the star received by a speechless Chef Peter Sanchez-Iglesias, and his evidently emotional father – Paco, that showed the true grit, determination and courage, that it takes to carry on and achieve something very special, following the death of brother and son, Jonray in 2015.

Needless to say shortly afterwards, I hopped online (I presume with quite a few others), and made a lunch reservation.

In 2016, after celebrating Casamia’s 15th birthday, the Michelin star and 5 AA rosette restaurant relocated to the former General Hospital site in Bristol city centre.  And alongside, the Sanchez Brothers brand expanded to include t

wo new additions; Pi Shop, a pizzeria offering both classic and speciality wood-fired creations and cocktails, and Paco Tapas, an authentic tapas and sherry bar.

With all three restaurants nestled in a row, overlooking the waterside, and tucked away from the busy thoroughfares; my imagination certainly could have allowed me to entertain the thought I was somewhere on the Continent – although the outside ‘arctic’ temperature said otherwise.  Thankfully, as you step over the threshold of Paco Tapas, both the restaurant and welcome are warm…and in the atmosphere, I returned to reflecting on memories of Spanish holidays in the sun.

Paco Tapas is small, but perfectly formed.  Dark stone walls are intermittently adorned with artwork and I have to say some very fetching red ‘bull’ coat hooks (I so want some of these!).  Although I will say, with high tables and wooden stools for seating, this is not a place to come if you are suffering with a back complaint.  However, it is the open kitchen and fragrant smell of smoke from the wood-burning grill that truly assists in transporting you 1000 miles south.  And that’s all before the brown paper menus are even placed before you.

I had been given a heads up that the Chef’s Menu was the ‘go to’ if you wanted to experience a tapas tour of Spain.  And while the Galician steak or more blog related ‘Octopus a la Gallega’ from the Canary Islands were tempting dishes; at £50 per person I went by recommendation, and added the sherry flight at £25 per person to, naturally, assist along the way.

A glimpse of the Chef’s Menu, doesn’t particularly provide much more of an insight into the tapas about to be received.  However, with an understanding of the restaurant’s concept in that ‘each single ingredient speaks for itself” – it certainly meets its objective.  A handy prompt of the sherry arrivals within the courses and also styles would have, from my own perspective, also been much appreciated.  Although, as it turned out the six sherry pairings are well spaced, and a kind member of the team, only too happy to print me out a copy of the receipt – displaying those included within the flight.

With the commencement of the tapas tour, the first few dishes are delivered together – producing a highly ‘Instagrammable’ table of delights.  A bowl of mixed olives, are accompanied with beautifully crusty hunks of bread lightly drizzled with seasoned olive oil.  While six salty boquerones float elegantly in a sea of vinegar and olive oil.  Add to that a board of wafer-thin slices of cured chorizo Iberico de Bellota and Galician beef cecina, and it’s hard to know which dish to attack first – it demonstrates simplicity at its best! 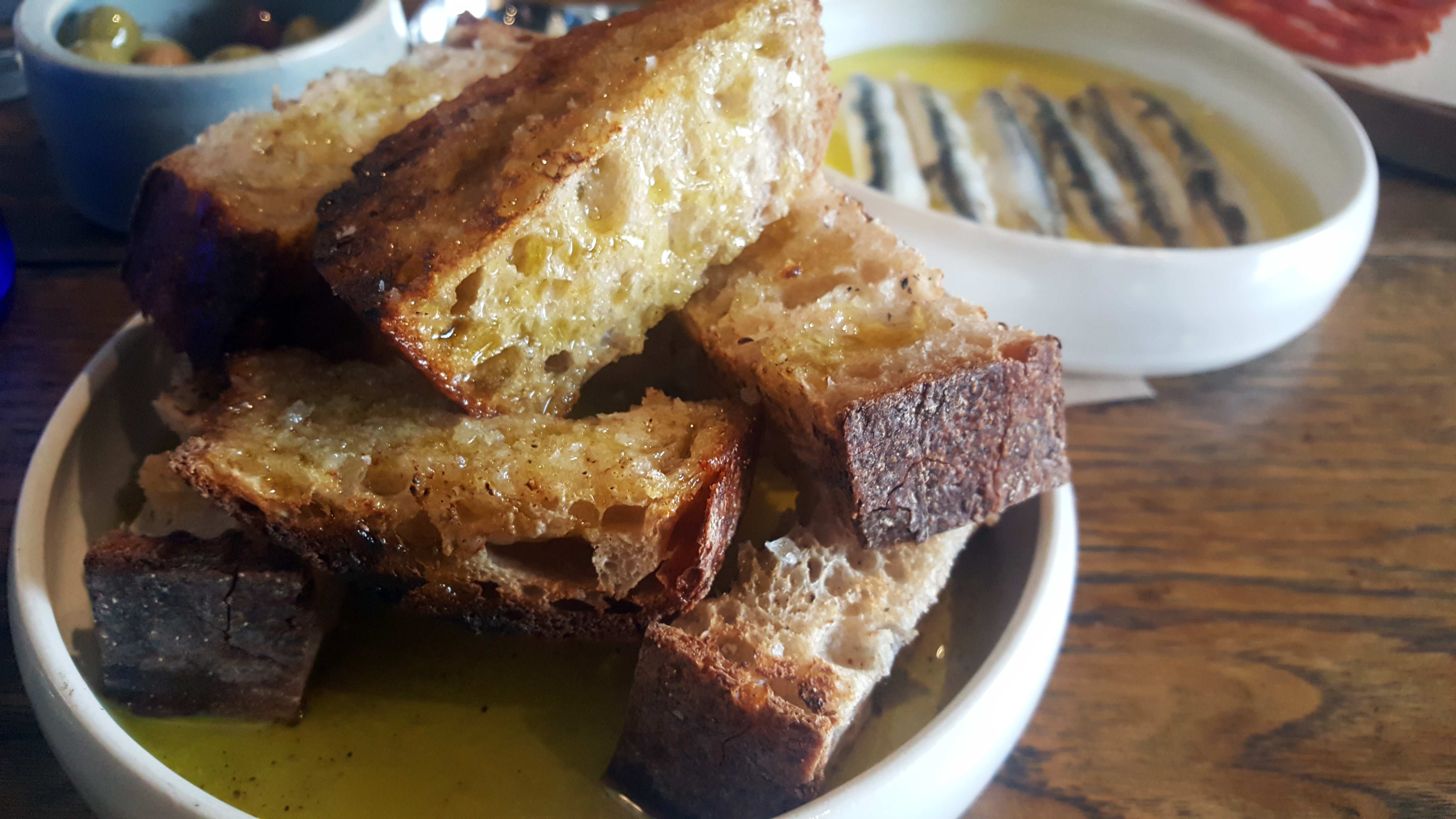 At this point, I am going to hold my hands up and declare that I am not an expert in sherry; the last time I partook in a tipple probably being circa 1989, where I was allowed a thimbleful of my Nan’s ‘Croft Original’ on a Sunday lunch time.  Oh…how I have seemingly been missing out!  With a glass of Tio Pepe Fino working well as an apéritif, the very dry sherry is a perfect match for the combination of olives, seafood and meat. 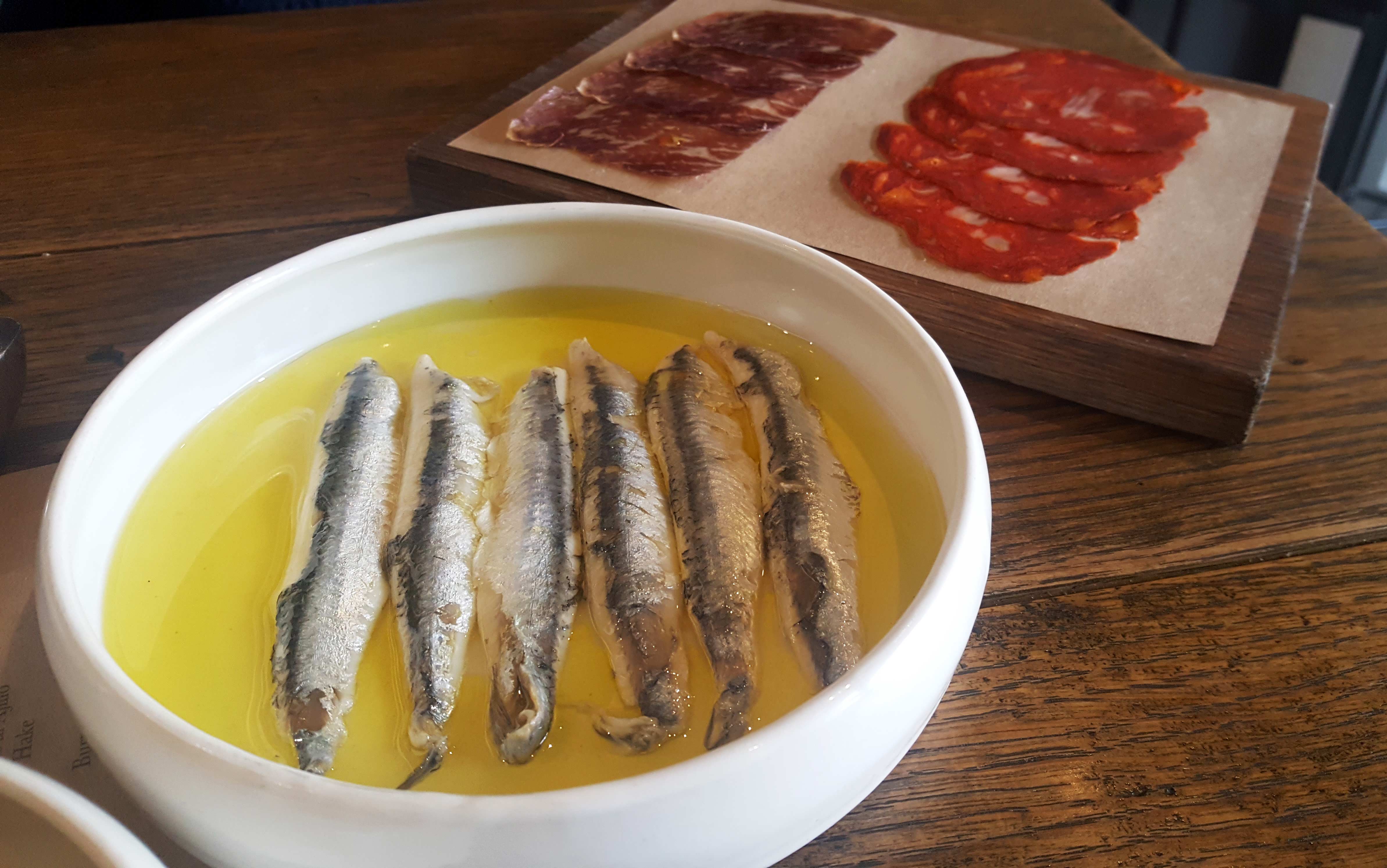 Popular in most bars and restaurants in Spain, the second dish produces two croquetas of beautifully fresh white crab meat.  Similar to a fish cake, although at the same time a million miles away from the often stodgy potato patty; these golden delicacies are much lighter than expected, and another two certainly wouldn’t have gone amiss! 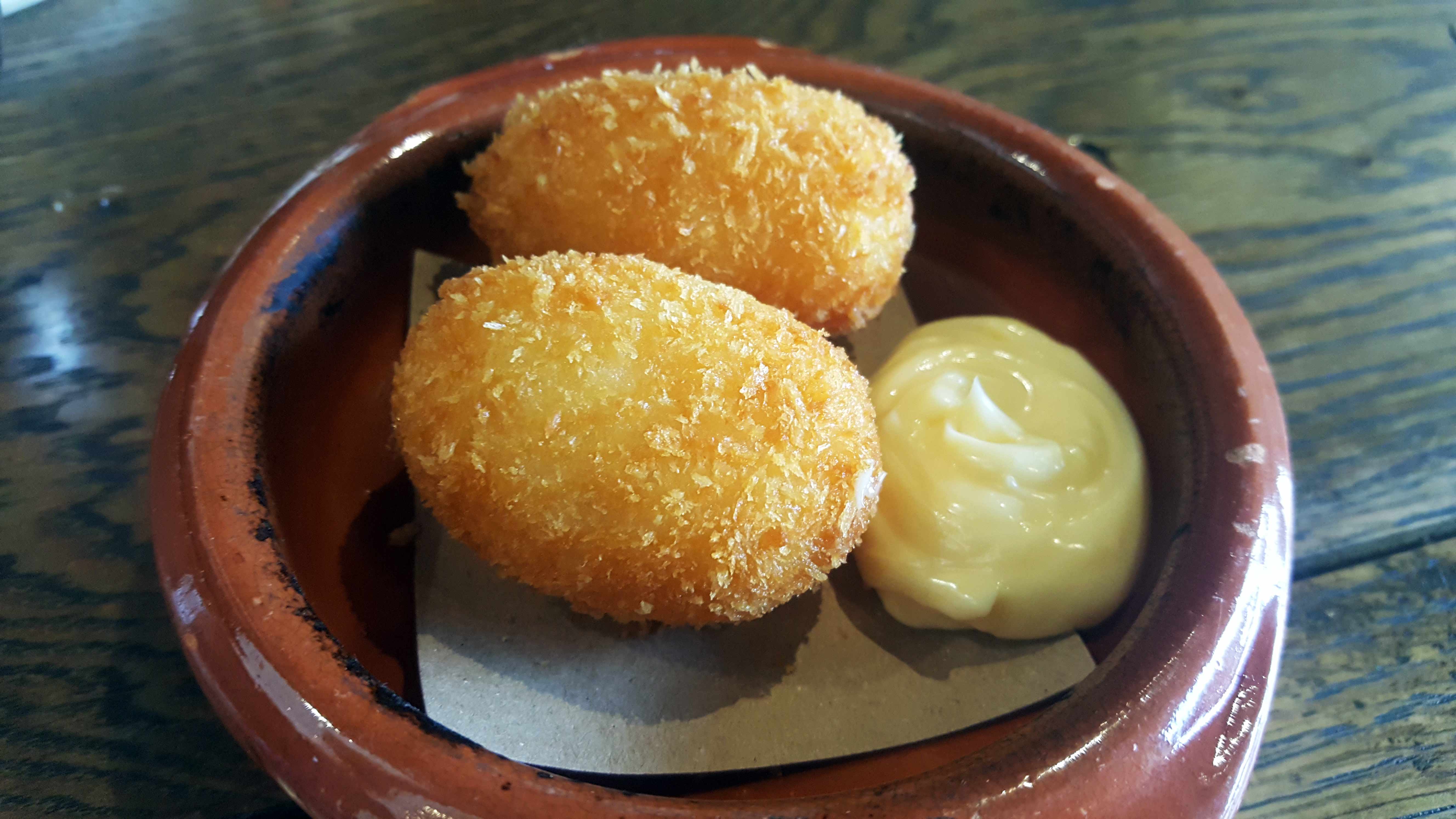 A second glass of sherry appears, this time deep mahogany in colour and dry and nutty in taste, my preference, so far,

lies with this pairing of Alfonso Oloroso; as does the next dish.  A delicious Tortilla Española, presents itself as the ‘Brad Pitt’ of omelettes (beautiful to admire – ha ha!); a plate of pure perfection, holding the secret of a rich, runny yolk at its centre.  At this point, if someone asks me to sum up everything that makes me smile about food, I could have demonstrated it by the contents of this table…pure and simple.

That is until the prawns put in an appearance; retaining the smokiness from the open grill, two garlic coated gambas lie innocently next each other.  Maintaining the tone that has already been set, there is no need for embellishments, this pair speak for themselves – almost to the point where they look too good to eat…almost!

The dish comes paired with the third sherry – a glass of crisp and smooth Micaela Manzanilla.  Explained as containing maritime notes; what it actually delivers is a fresh, salty aroma that when you close your eyes, allows your imagination to transport you to the Atlantic Ocean – ironically near to where it is produced.  It is a perfect accompaniment to both the prawns and the hake that follows. 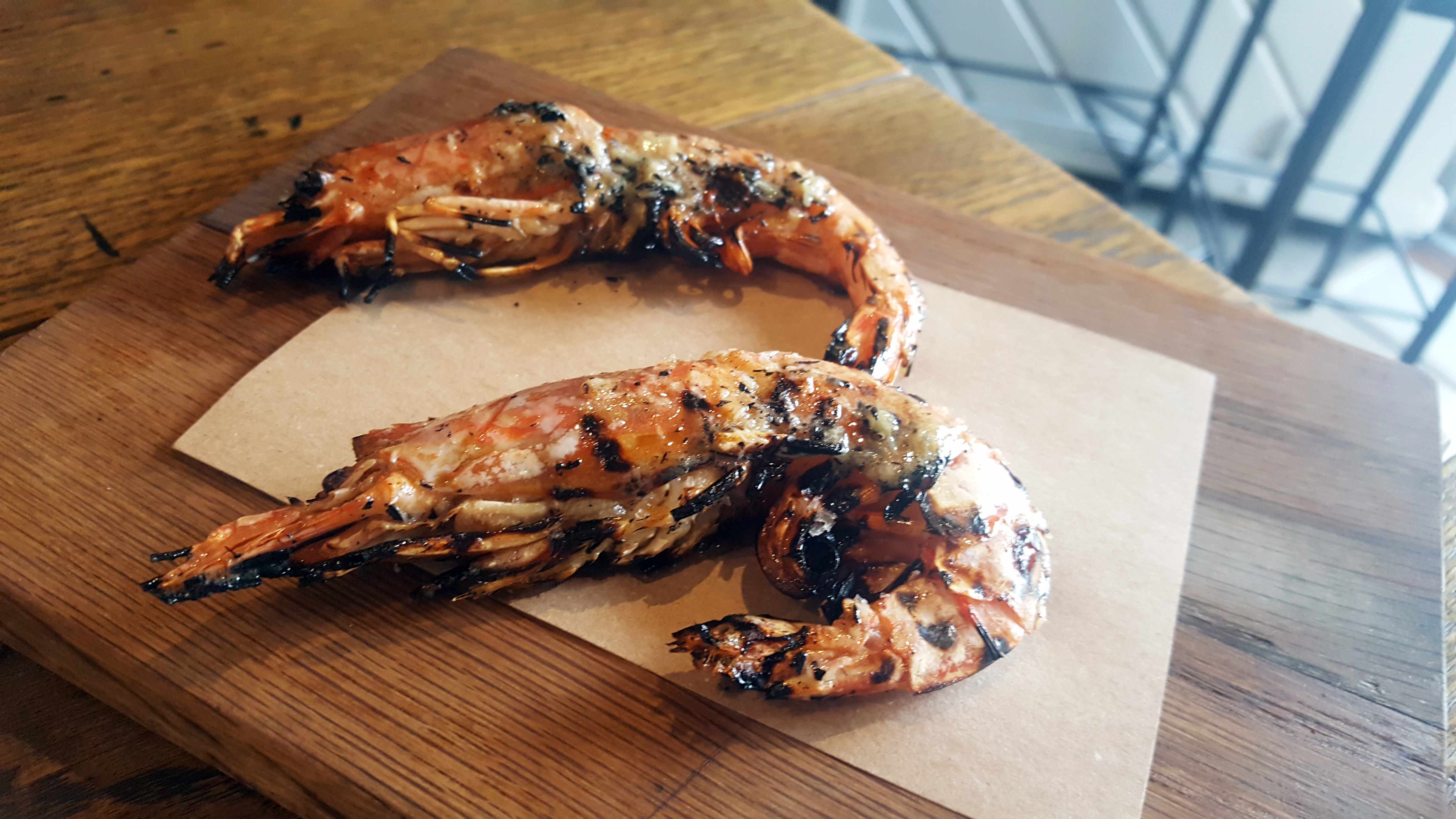 A second seafood dish of lightly chargrilled hake is perfectly cooked and seasoned, displaying a crispy skin, with delicate and flaky white flesh underneath.  Although I will say that on adding a squeeze of lemon, the mayonnaise that artfully sits next to it, is simply not a necessity.  Perhaps the only fault I can find, is that the portion requires sharing between two…that would be a no then! 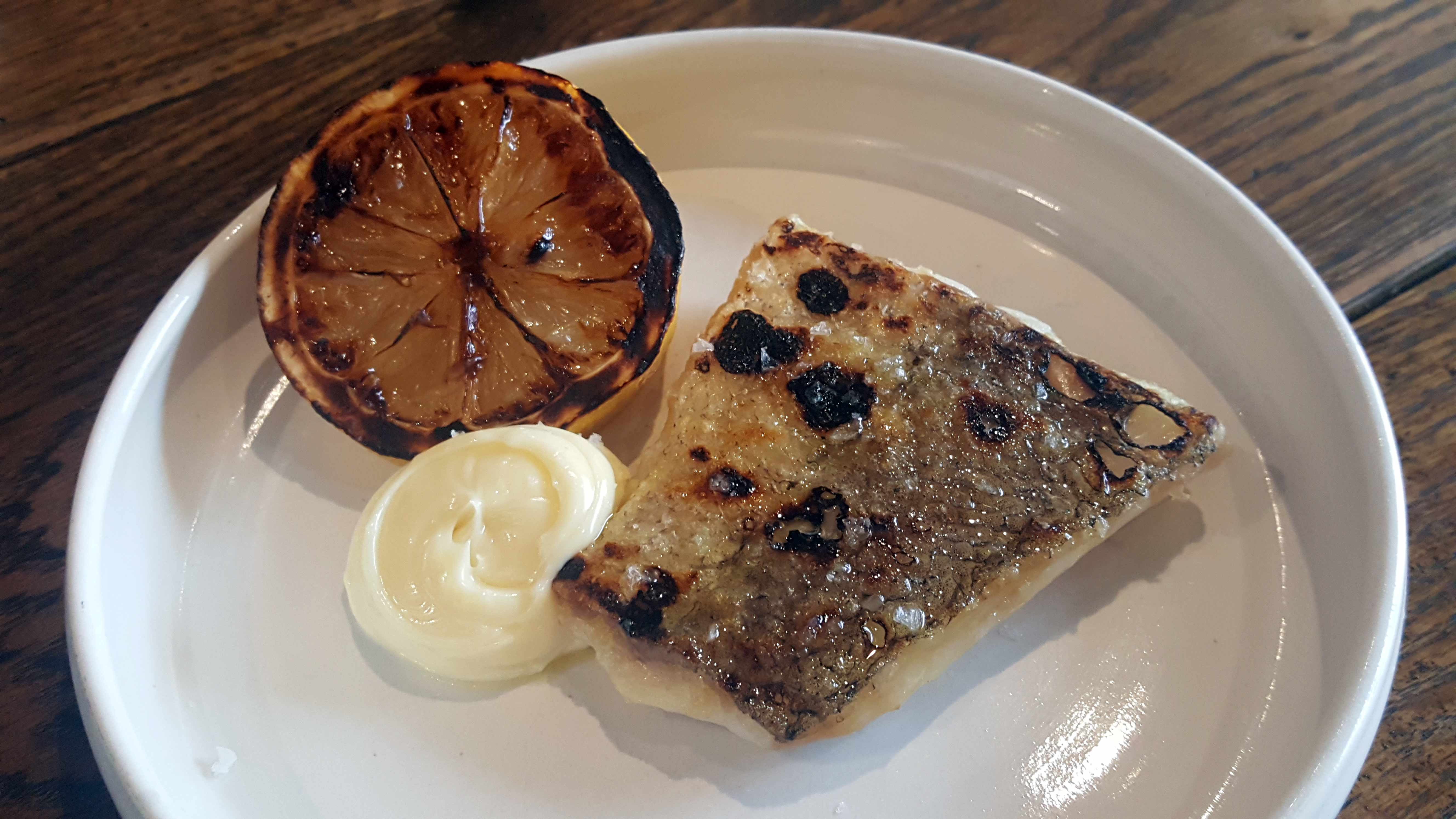 ive and six come paired with a 12 year old Viña AB Amontillado Seco; again dry, but this is lighter with hints of citrus and nuts.  A charred leek invites you to peel away the top layer of leaf sheath to uncover it’s blanched and sweeter inner, while still retaining an air of smokiness from the blackened outer,  It’s accompaniment is a beyond delicious romesco sauce – crunchy with almonds and full of flavour from the roasted peppers; it’s a sauce where you should imagine that no one is looking, and carry on licking the stuff off of your finger, long after the leek has gone! 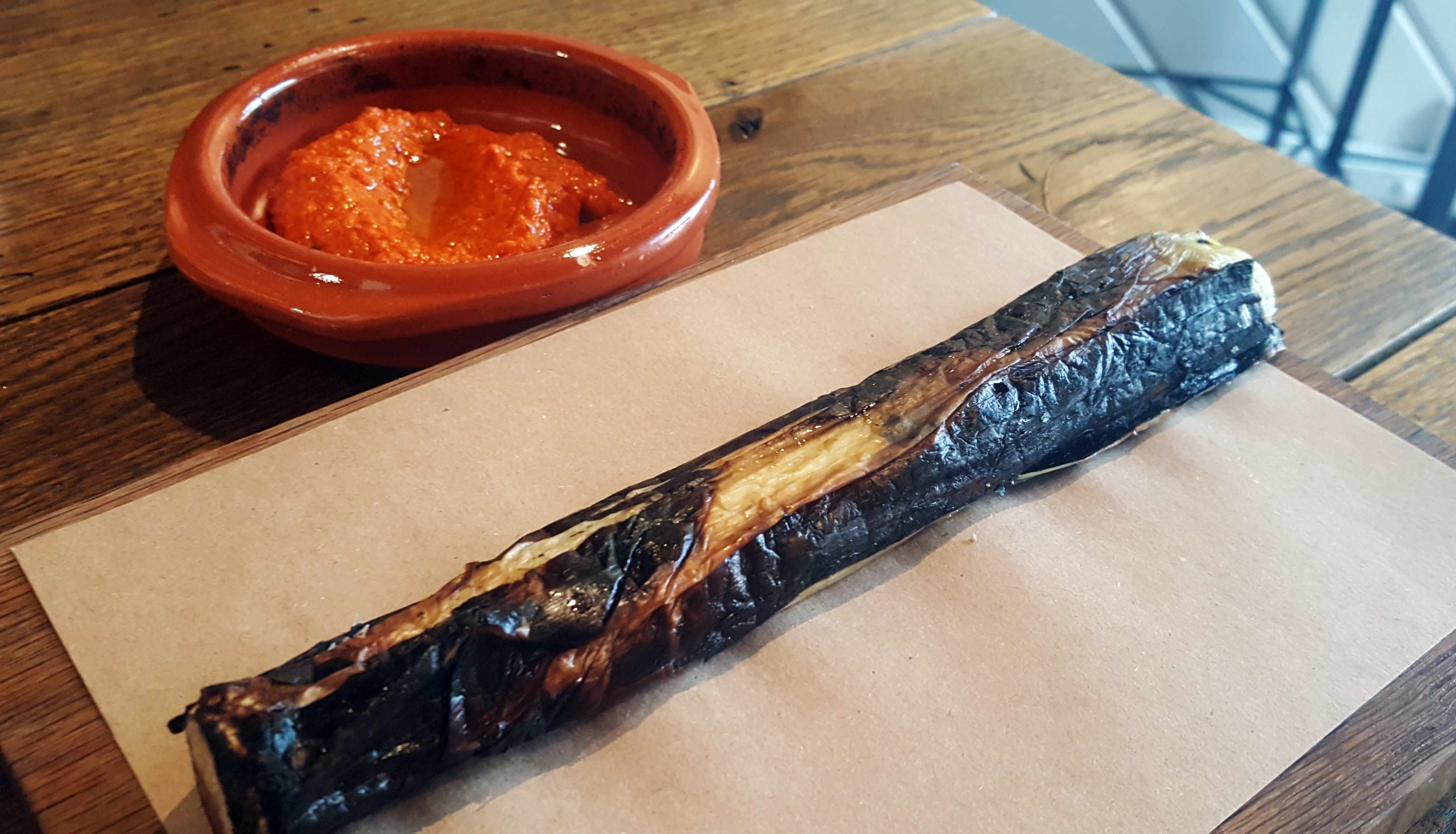 Hotter than the surface of the sun; this dish comes with a public safety announcement for your tongue…wait a few minutes before tucking in!  A traditional Andalusian dish, it bursts with flavour from the tomatoes,  peppers, Serrano ham and eggy core. Served alongside are two duroc pork ribs; beautifully seasoned, crispy skin and meat that melts.  In hindsight I only wish I had taken a photo of what remained…basically two bones and a dish that had the appearance of having already been washed!

At this point, and after 4 glasses of sherry, a confession is on the cards; I have to say I’m starting to feel a tiny bit tipsy!  I can also understand what the necessity had been of my Nan’s afternoon nap after sherry and Sunday lunch…needless to say it’s a good job I’m sat on a stool! 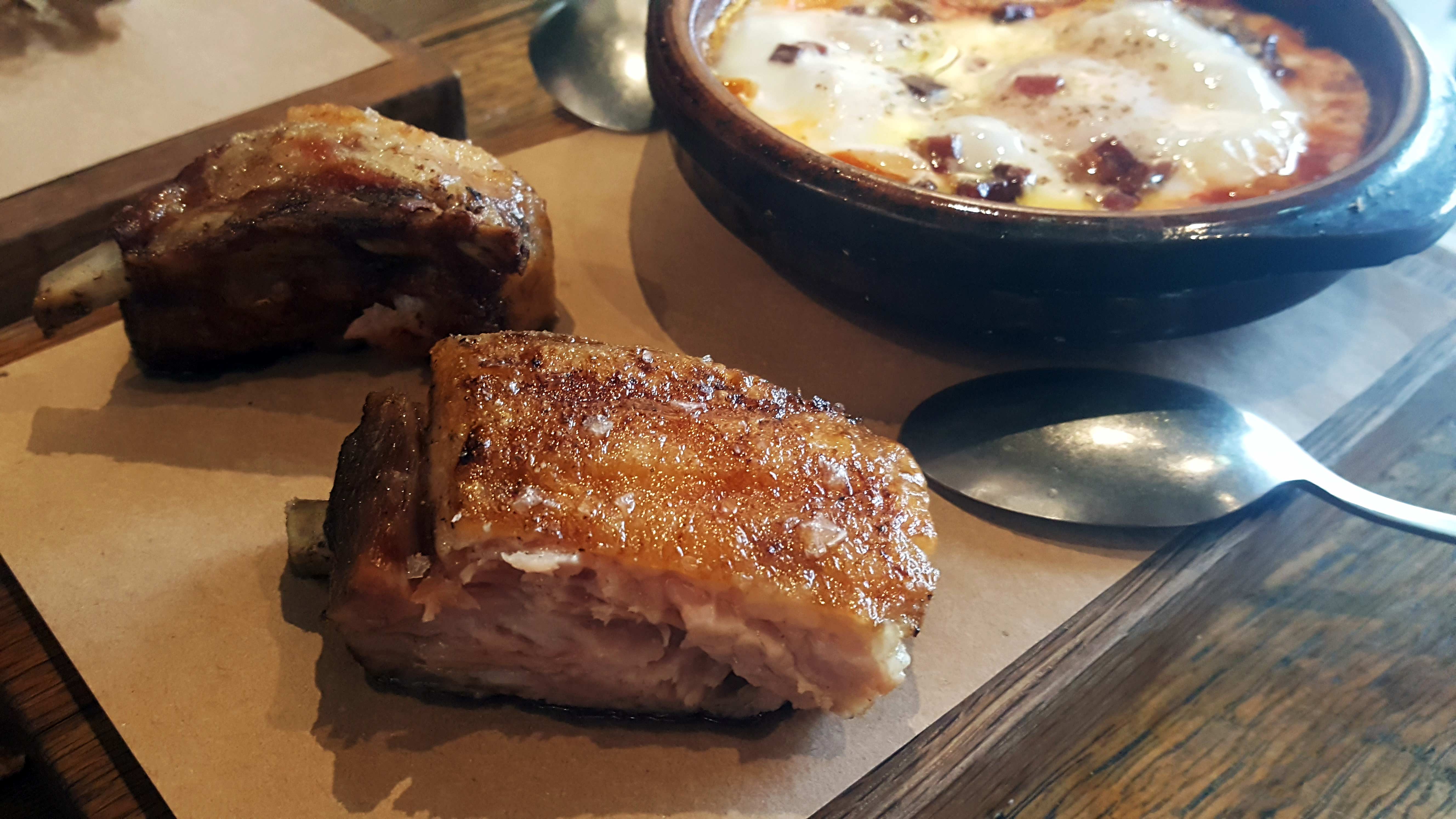 The final savoury tapa, builds on the previous meat dish, and comes in the form of three individual portions of stuffed quail.  Pleasantly gamey, although I will say the meat isn’t particularly flavoursome; however it is elevated to almost ‘godlike’ proportions by the sobrassada and date stuffing.  Sweet on the palate from the dates, and adding a touch of spice from the cured sausage,  this was simply inspired.  Its sherry pairing is Leonor Palo Cortado, a 9 year old transition sherry, that sits between dry and sweet.  It’s stunningly nutty and vanilla taste ensures I am already googling where I can buy a bottle before I leave!

The culmination of this chef’s menu of awesomeness, comes in the form of the Spanish custard dessert – crema Catalana.  With a fennel seed crust, while similar in appearance, it is lighter in texture and taste than a crème brûlée.  I’m just going to leave this one here…but I promise, miss it and miss out.  Paired with the second sweetest sherry, Paco Tapas offers – the Solera 1847 Oloroso Dulce, makes for a perfect digestif and assists in ending the meal on both an elegant and high note.

Certainly – if I have the opportunity, I won’t be saying ‘no’.  However, I will say a visit to the mother-ship ‘Casamia’ continues to be very much on my radar.  Although seeing as they’re all in one location, whose to say I can’t eat tapas one evening, pizza for lunch and then finally get to experience the renowned tasting menu…hmm – now there’s a thought!

Would I recommend Paco Tapas?

If you love tapas, don’t miss out!  Two of us visited for lunch, and based on my own experience (and obviously if you don’t mind a tipple (getting sloshed on sherry at midday – ha ha!), I would recommend a trip to Paco Tapas at this time.  My perception is, that this is not necessarily a restaurant for a romantic meal for two, but perfect for groups; it has a lively and vibrant atmosphere – and I would guess these vibes increase in the evening.

Faultless food, enhanced by faultless service…what more can you ask for!  Just go.