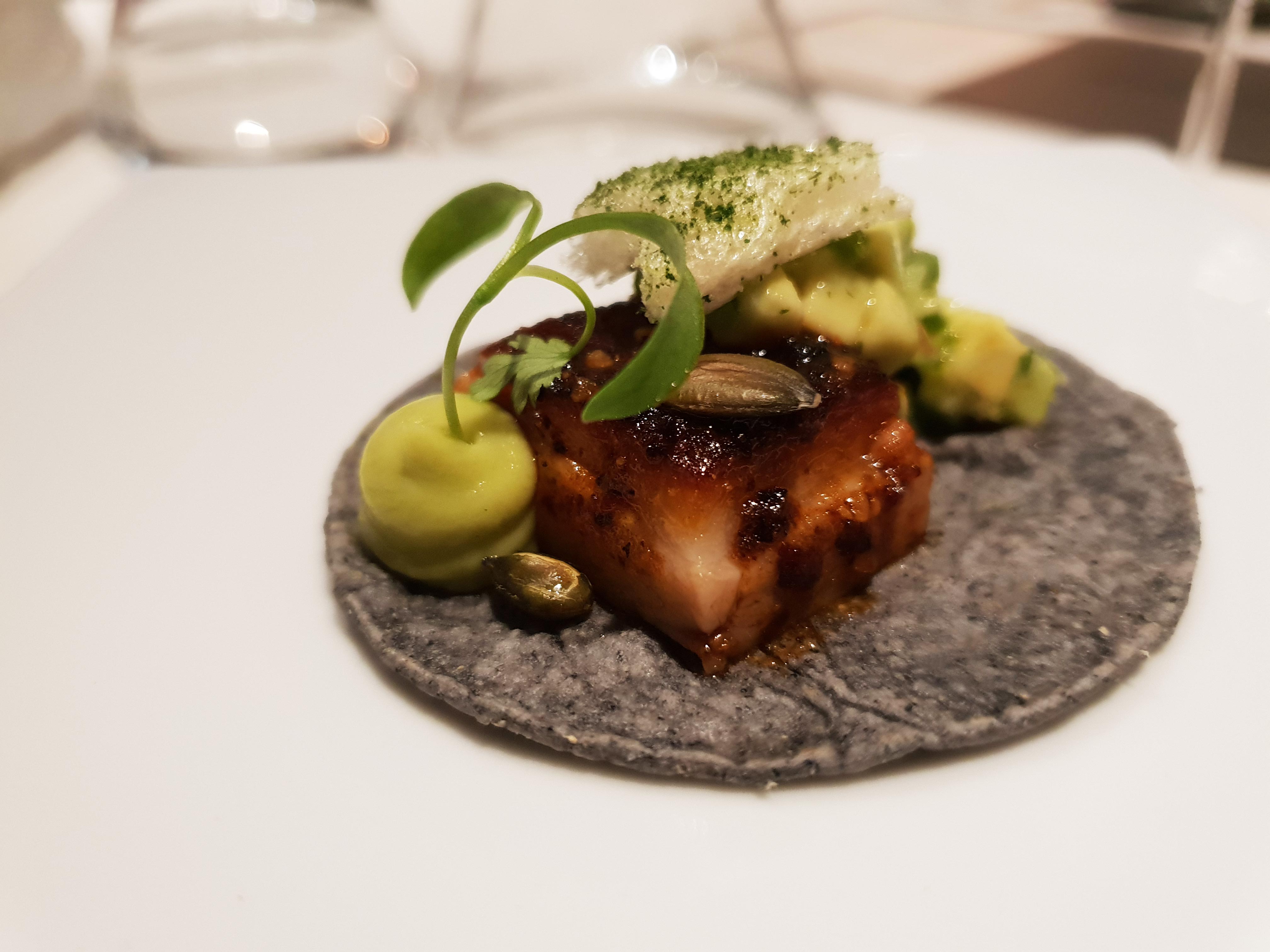 Occasionally I find myself wondering whether I am, in fact, ‘losing the plot’.  I imply this, as if you’re willing to take a 600 mile round trip, to essentially dine out, there must be some degree of madness going on?

Named after the Raby Estate, and the hunt that used to meet at the 200 year old Grade II listed building, the premises were taken over by self-taught Chef James Close in 2009.  Initially awarded its first Michelin star after only three years, a second subsequently followed in 2017.

With 26 covers, Raby Hunt is a relatively intimate affair.  Minimalist interiors with a palette of black, grey and white provide a modern look, while the addition of a quirky skull theme supplies a talking point.  Throw in a playlist to reminisce over, with the likes of early Coldplay, Nick Cave and Oasis tracks, and you can begin to a) get a sense of the comfortable, unpretentious atmosphere and b) the chef’s age…and woefully mine. 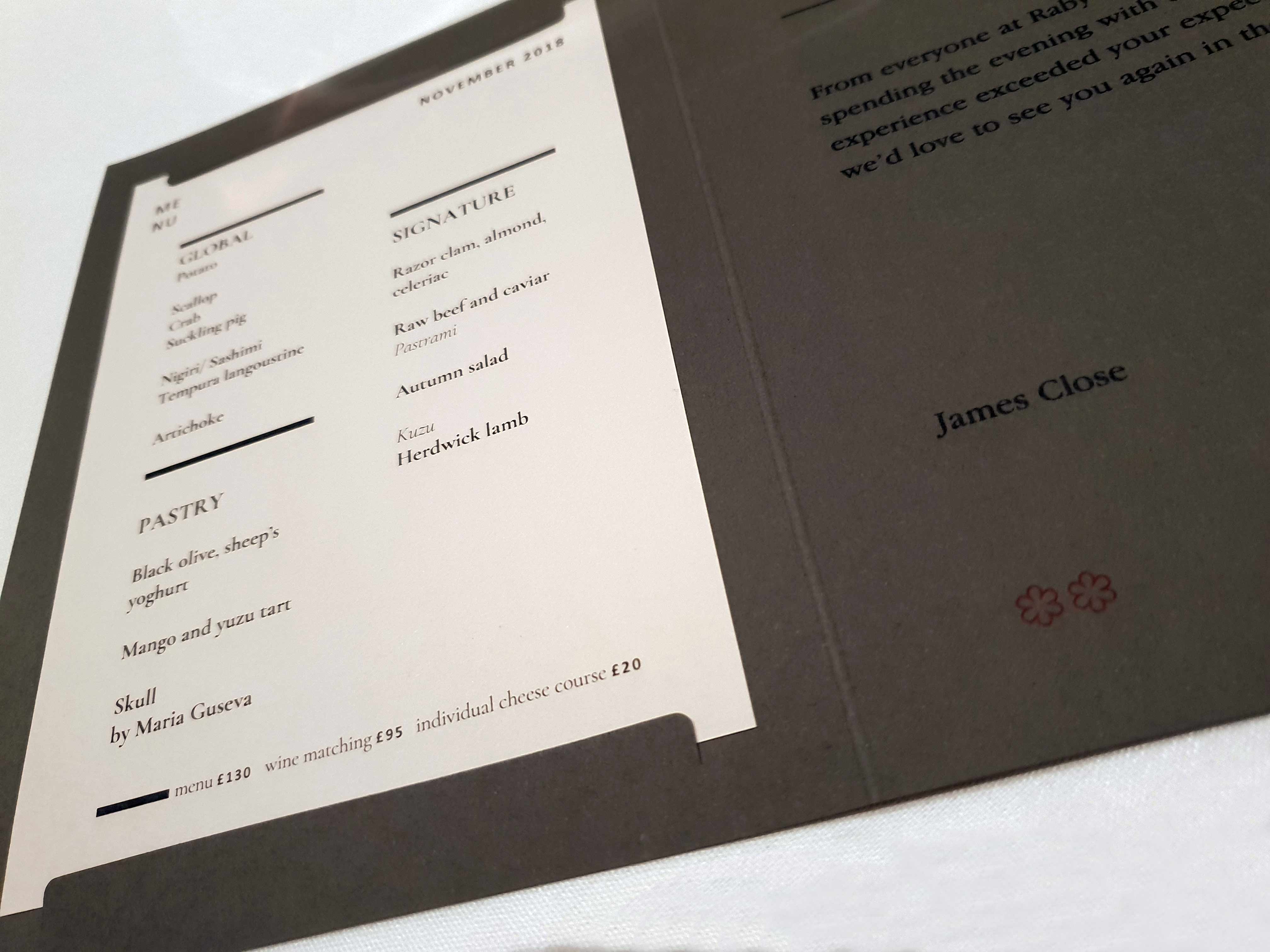 Split into three sections, specifically Global, Signature and Pastry – the 13-15 course tasting menu of what I can only describe as gastronomic theatre – to the credit of James Close, leaves a lot to the imagination.  Priced at the time of writing as £140 per person/£170 per person for the kitchen table – it is simple, and ingredient-led; the downside being for some, that it is uncompromising.  Aside from minor changes, be mindful that there are no substitutions and vegetarian options are not available. 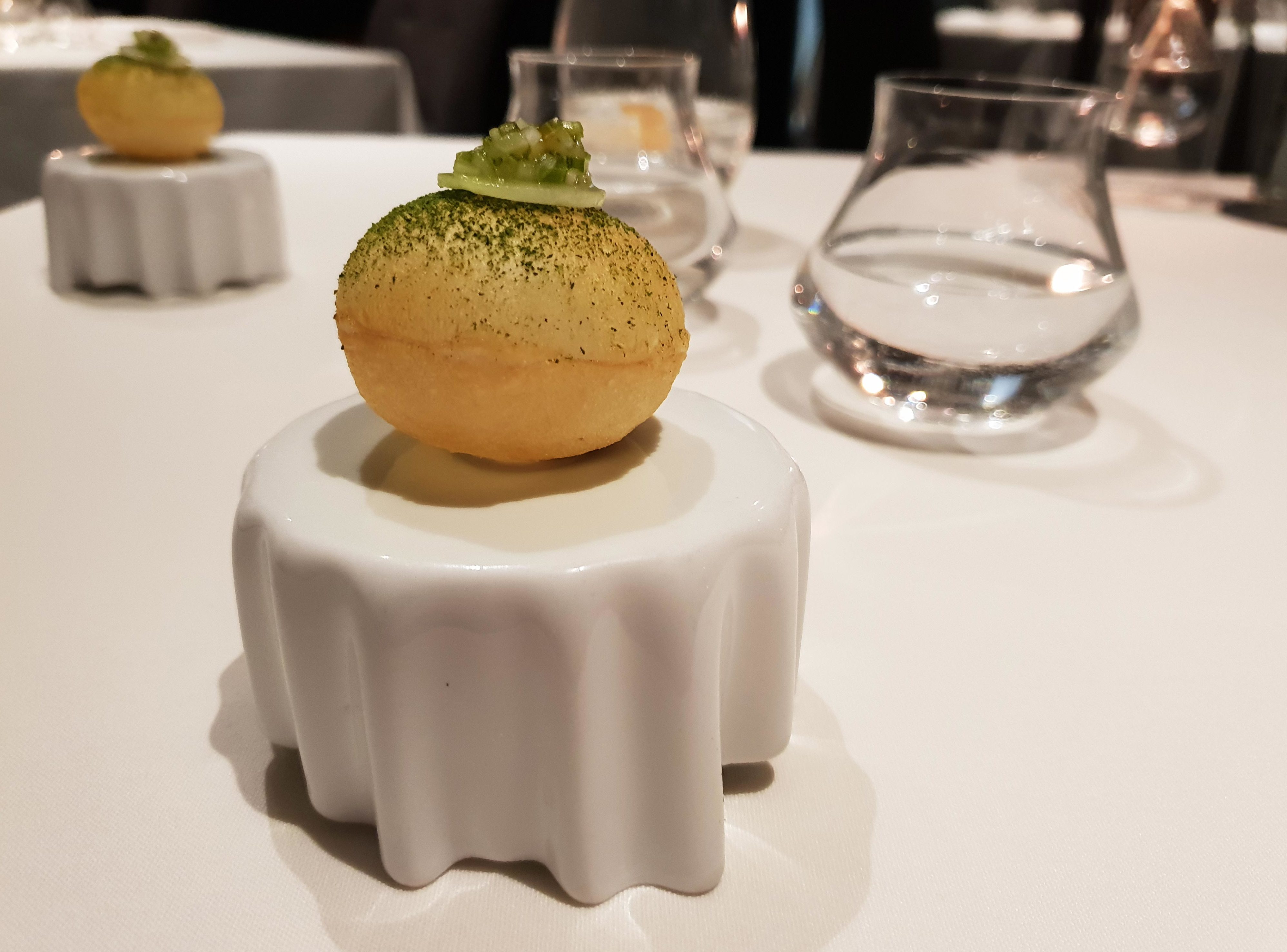 A journey to France gets the tasting menu underway, as two delicately crisp ‘puffed up’ pommes soufflées with oyster emulsion appear. Disappearing seconds later in one rather large ‘snake-like’ mouthful – the punch of the lovage garnish, while providing a welcome kick, is well judged without being overpowering. 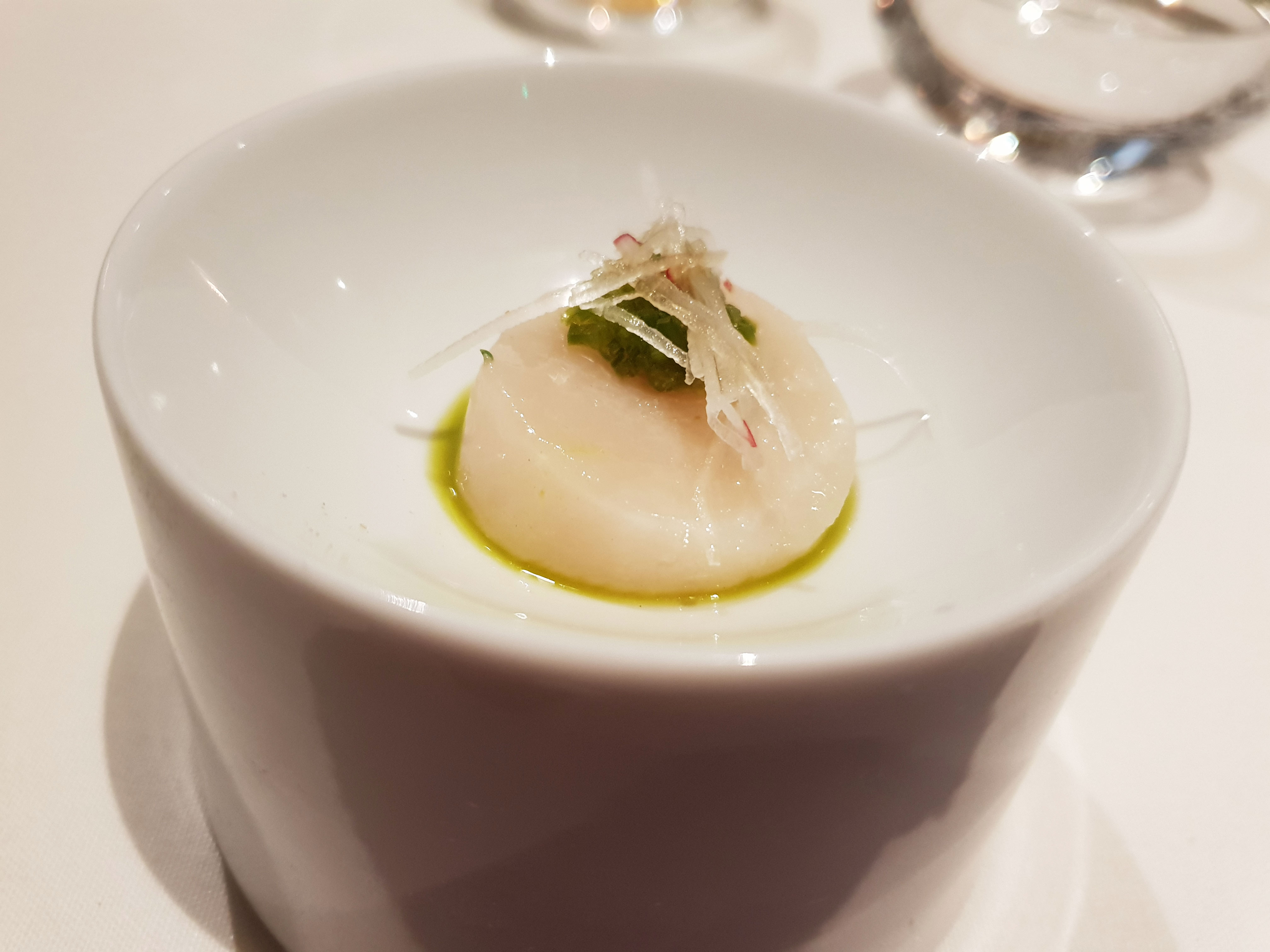 Skipping over the Atlantic, a meaty raw, sweet scallop is dressed with jalapeño and light wisps of radish.  Beautifully fresh, the heat from the chilli is balanced out by the bitterness of the addictive lime dressing it sits in. 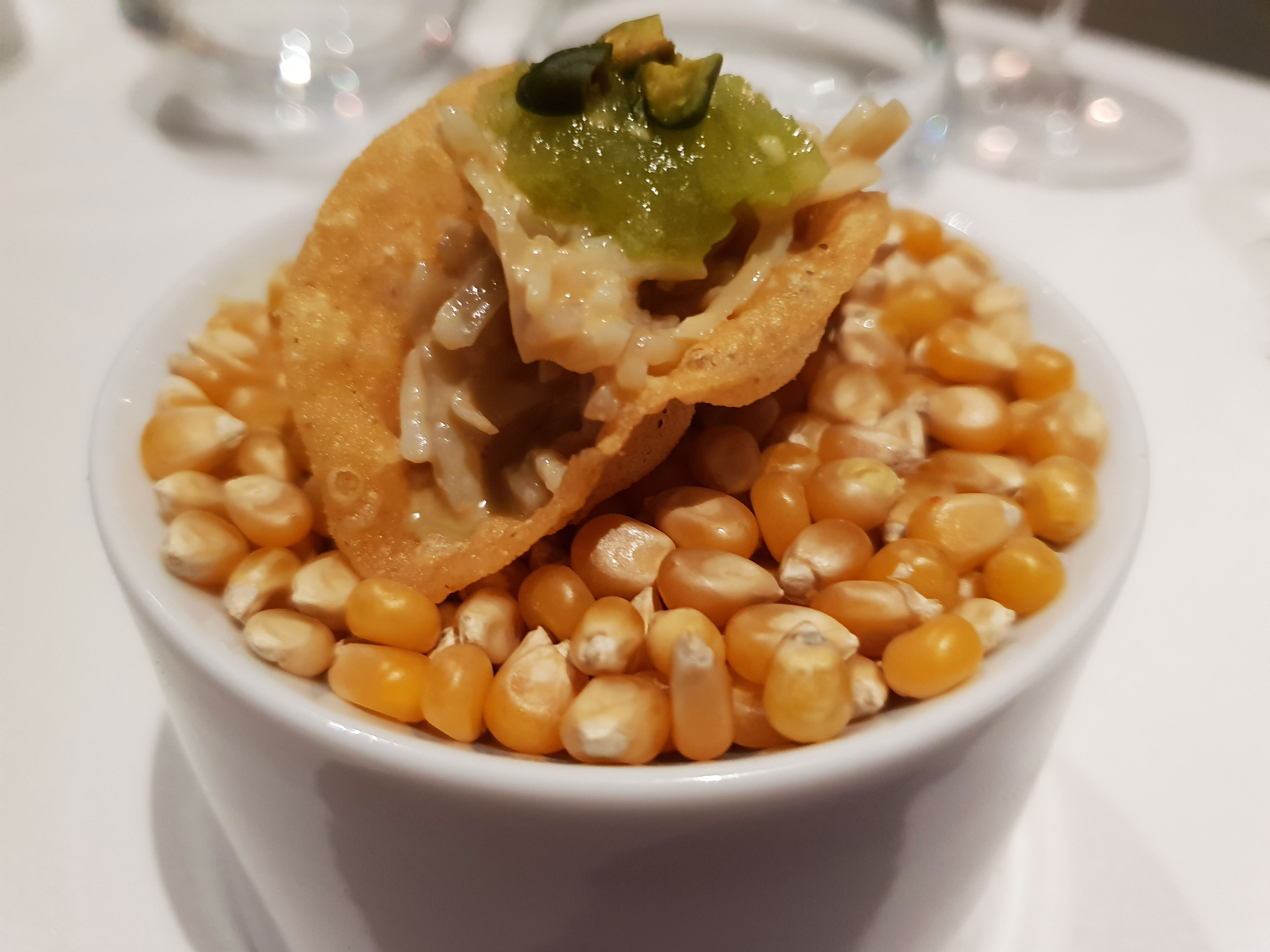 Remaining in Mexico for inspiration, a third snack of a crispy crab taco with a salsa verde of tomatillo arrives topped with pistachios.  Presented on a bed of dried popcorn kernels, this is the dish that simply keeps on giving in waves of saltiness, and with a heat that continues to build even after the last bite.

Up next, a textural contrast in snack, in the form of a soft blue open corn taco, topped with sweet suckling pig, and accentuated with a warming salsa macha and avocado.  Visually, to say I’m observing perfection from Raby Hunt would be an understatement.  An inspired combination, it captures the flavours of Mexico on a tortilla. 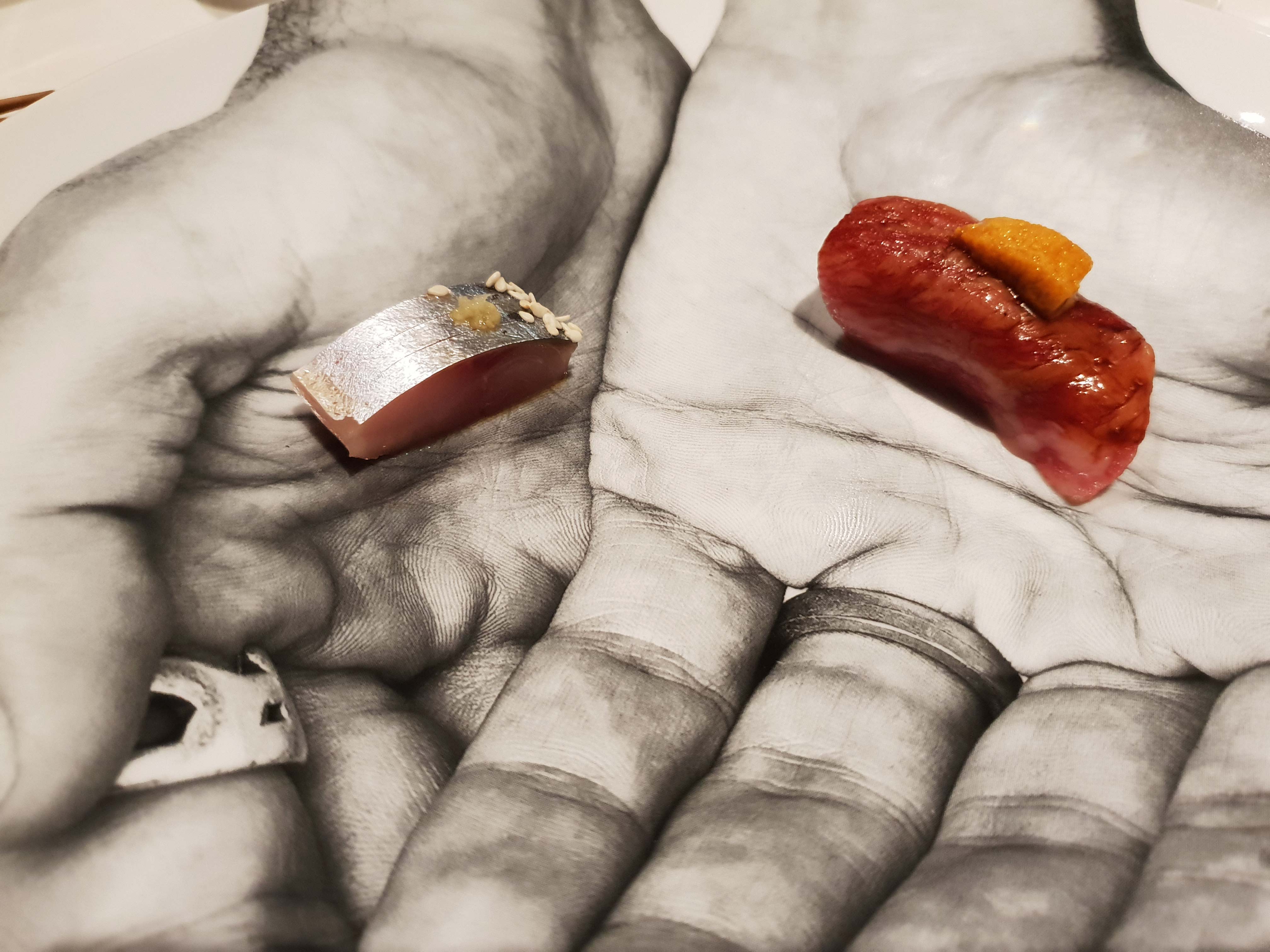 Heading 11,000km back east this time, I have to say as dishes go, the fifth ‘act’ is simplistic in style, but optically impressive – courtesy of the plate it presents on.  Japanese delicacies of salty mackerel sashimi and warm, tender A5 Miyazaki wagyu nigiri sushi rest on greyscale palms, begging to be pinched with the chopsticks that accompany. 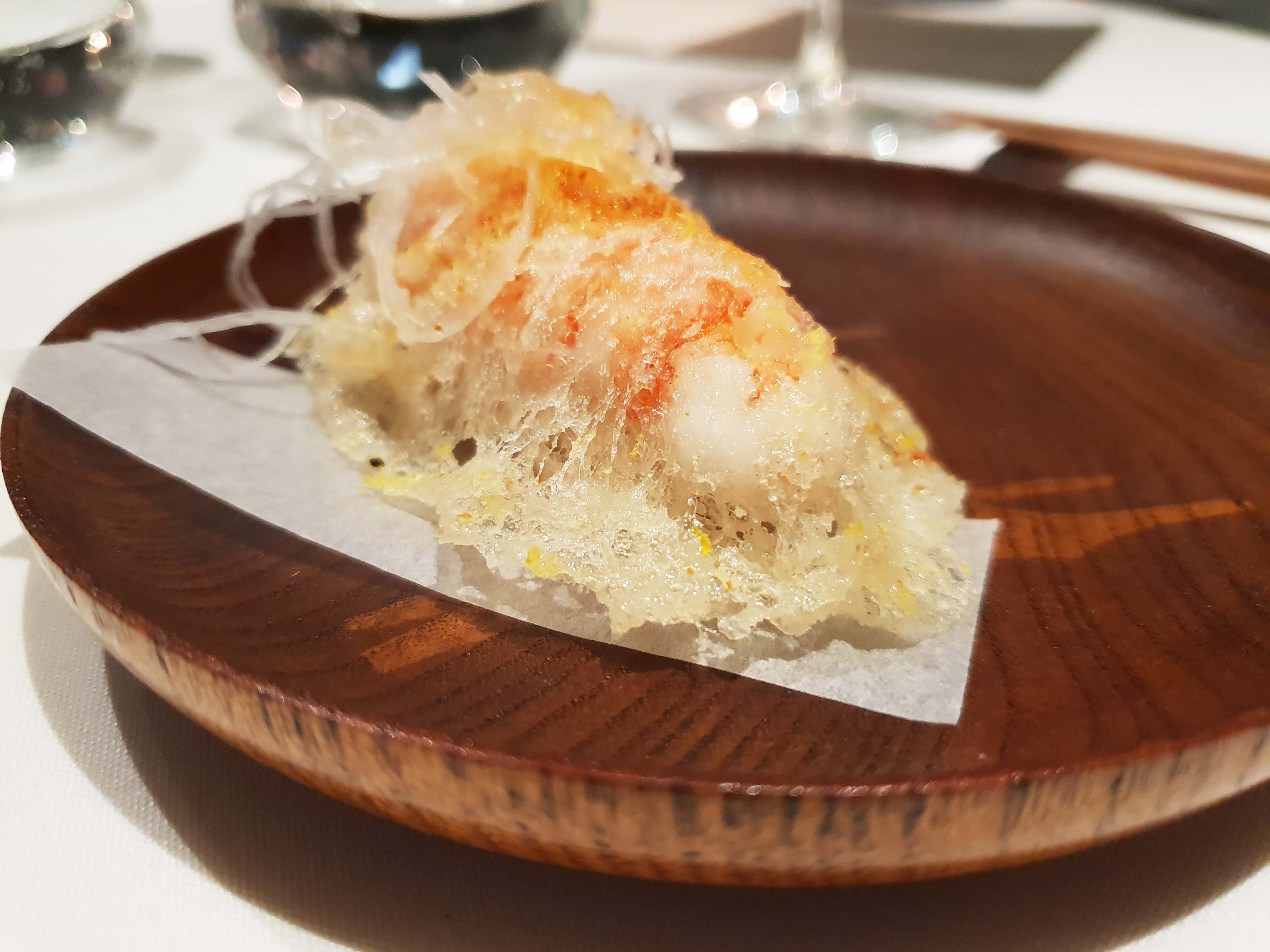 The final dish in the ‘global’ section remains in Japan with tempura langoustine.  Coated in a lace-like, crispy batter with hints of sour yuzu and sansho pepper; it’s a rich and seductive combination that amalgamates soft and crunchy textures in three glorious mouthfuls. 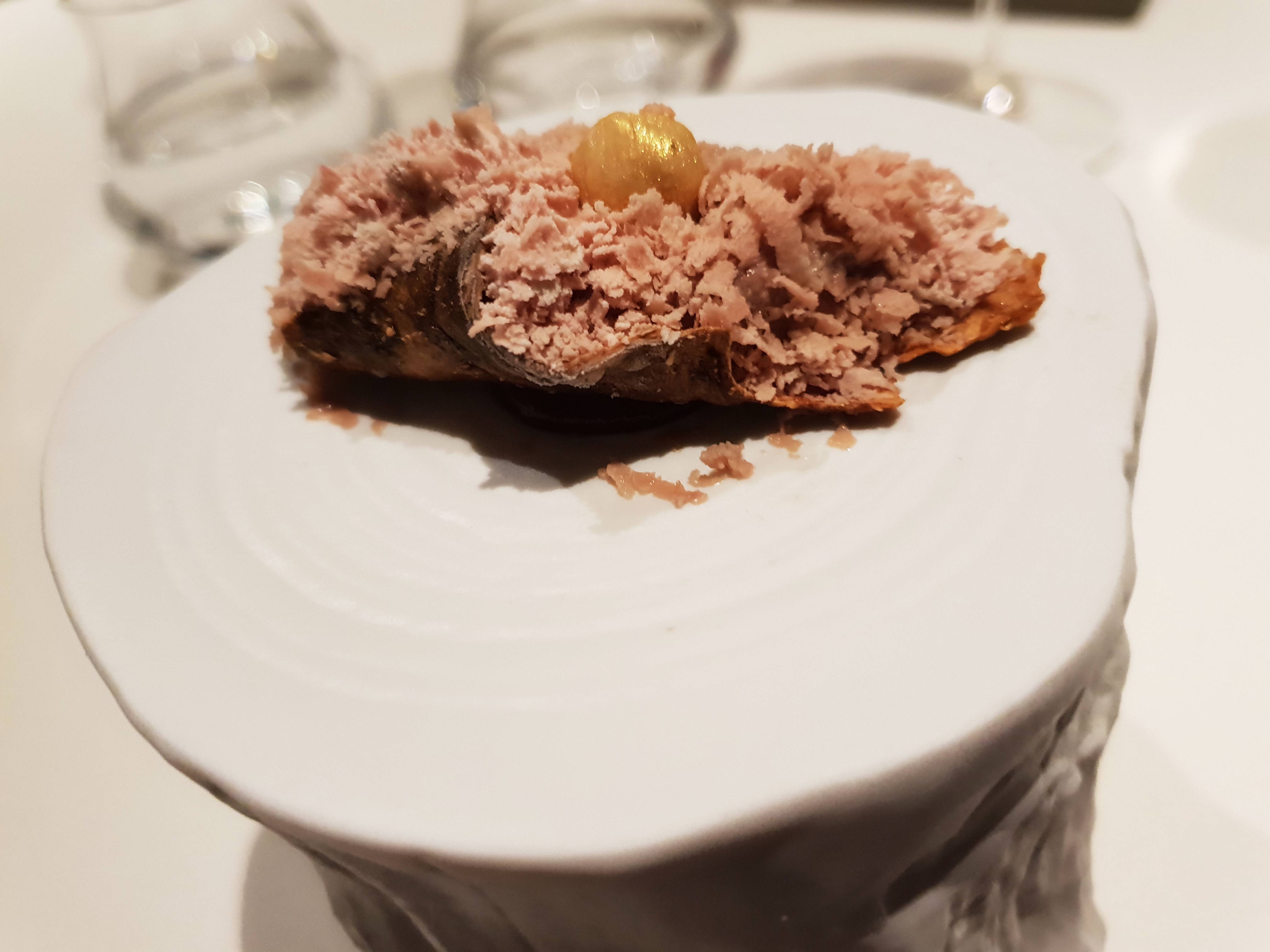 I always love it when a dish comes with a warning; this one less “you’re going to feel the burn”, and more a statement of “tuck in as soon as it arrives” (basically disguising its true meaning of ‘don’t mess around taking endless pics’).  With both hot and cold elements, the first signature dish of chicken liver parfait and duck pâté is blended and comes frozen in a theatrical cloud of LN2 with grated artichoke to top. 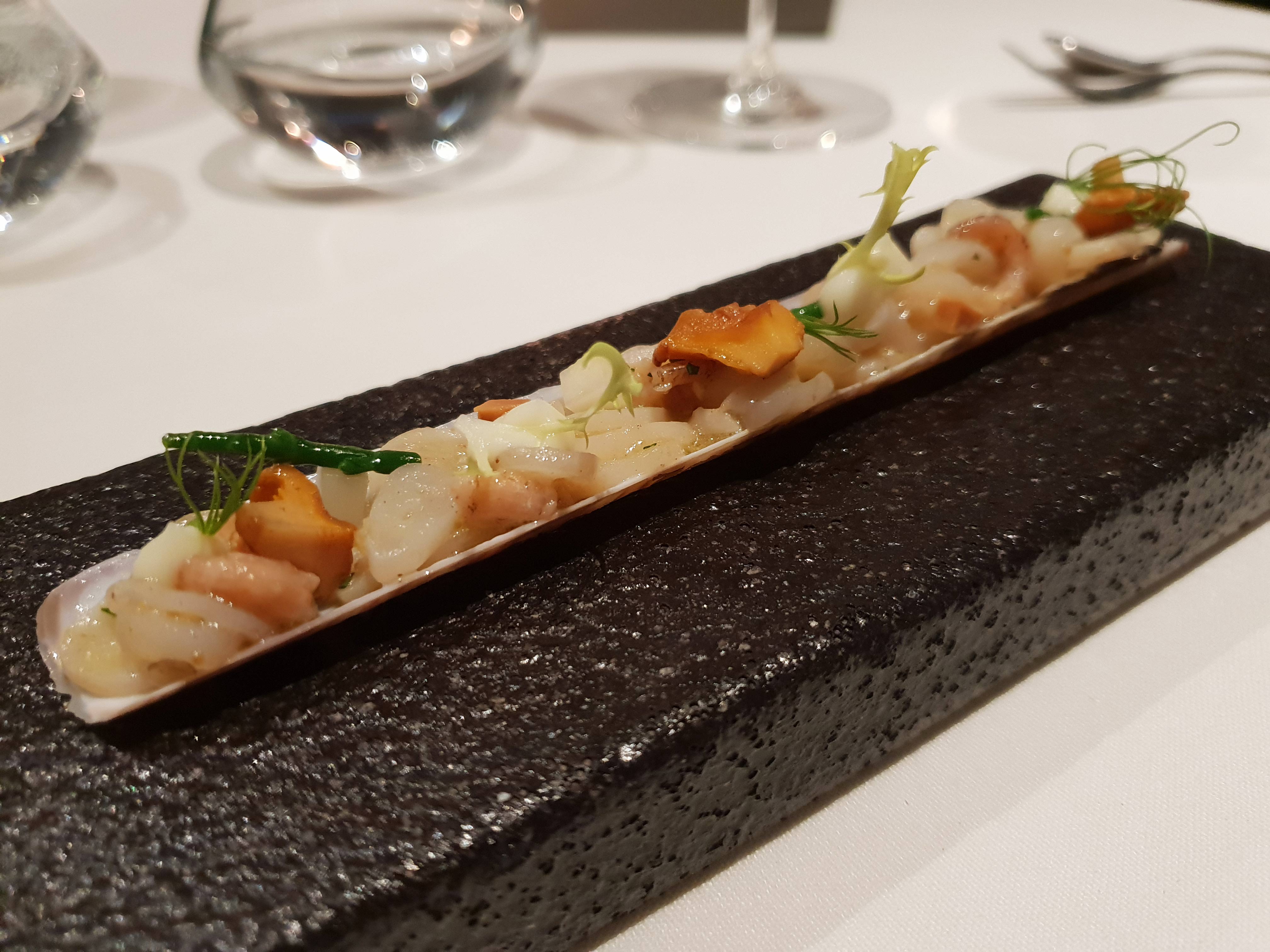 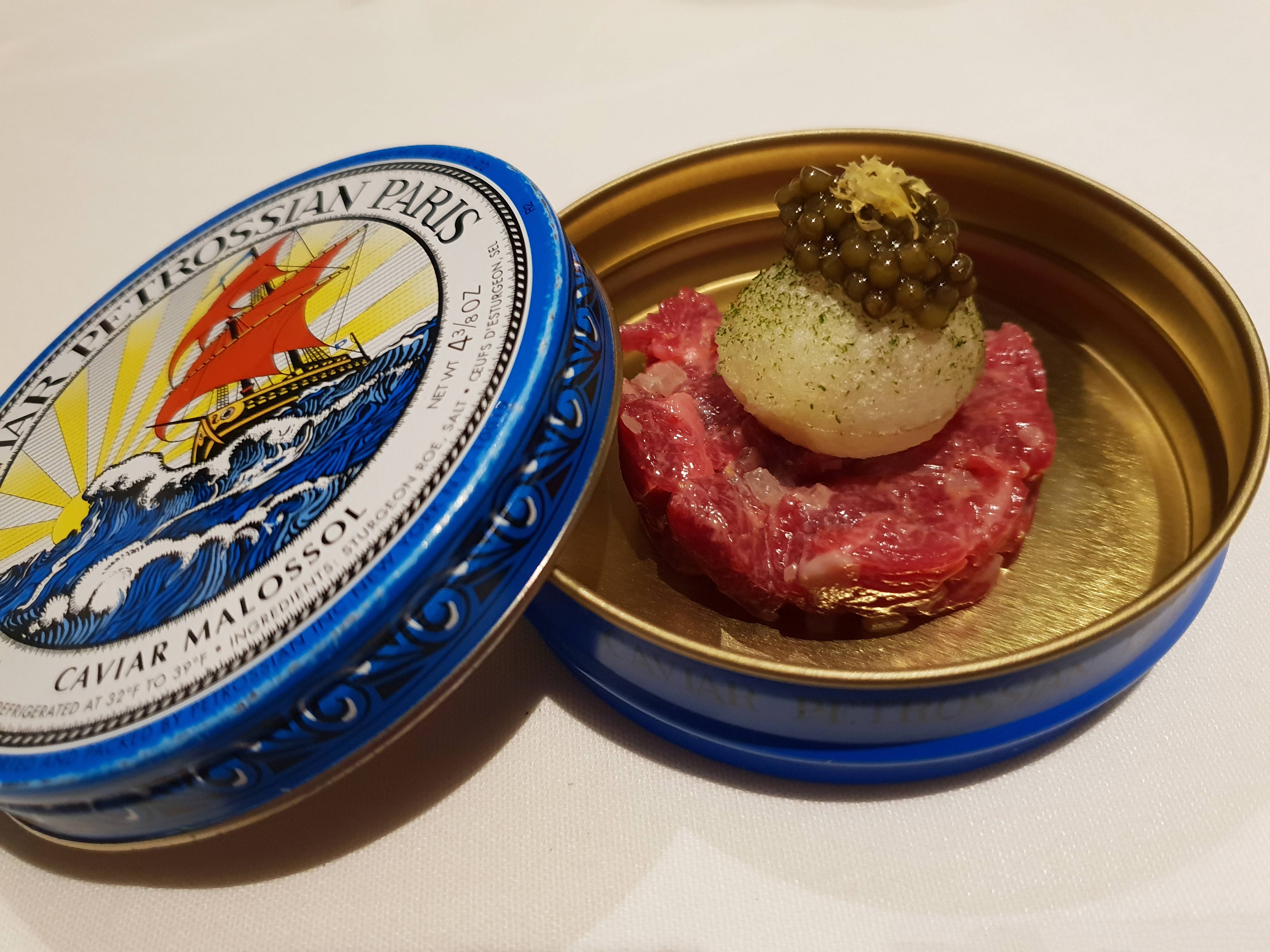 Round two of the pomme soufflé, and this time it’s perched on a patty of steak tartare, topped with a spoonful of fresh Petrossian Paris caviar and smoked dill.  Presented back in the caviar tin, visually it’s fun; and while appearing simple, the flavours are far from basic. It’s a sophisticated, rich and indulgently moreish and creative combination. 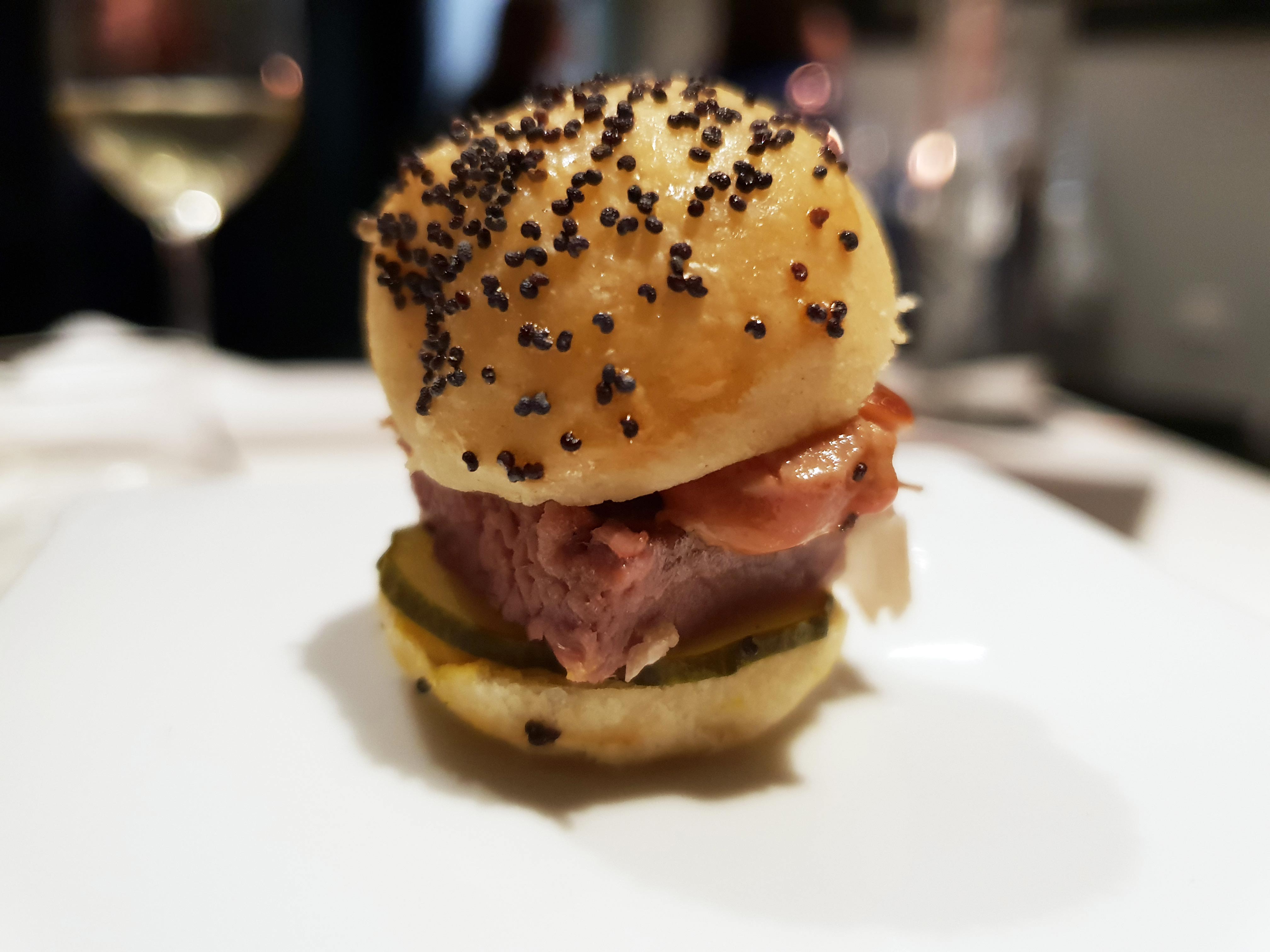 If Carlsberg did burgers, this would ‘probably’ be the most expensive (mini) burger in the World…it turns out it’s also pretty damn tasty to match.  A decadent mouthful or two – depending on your ability to unhinge your jaw; layers of wagyu, foie gras and white truffle are a triumph in a bun. 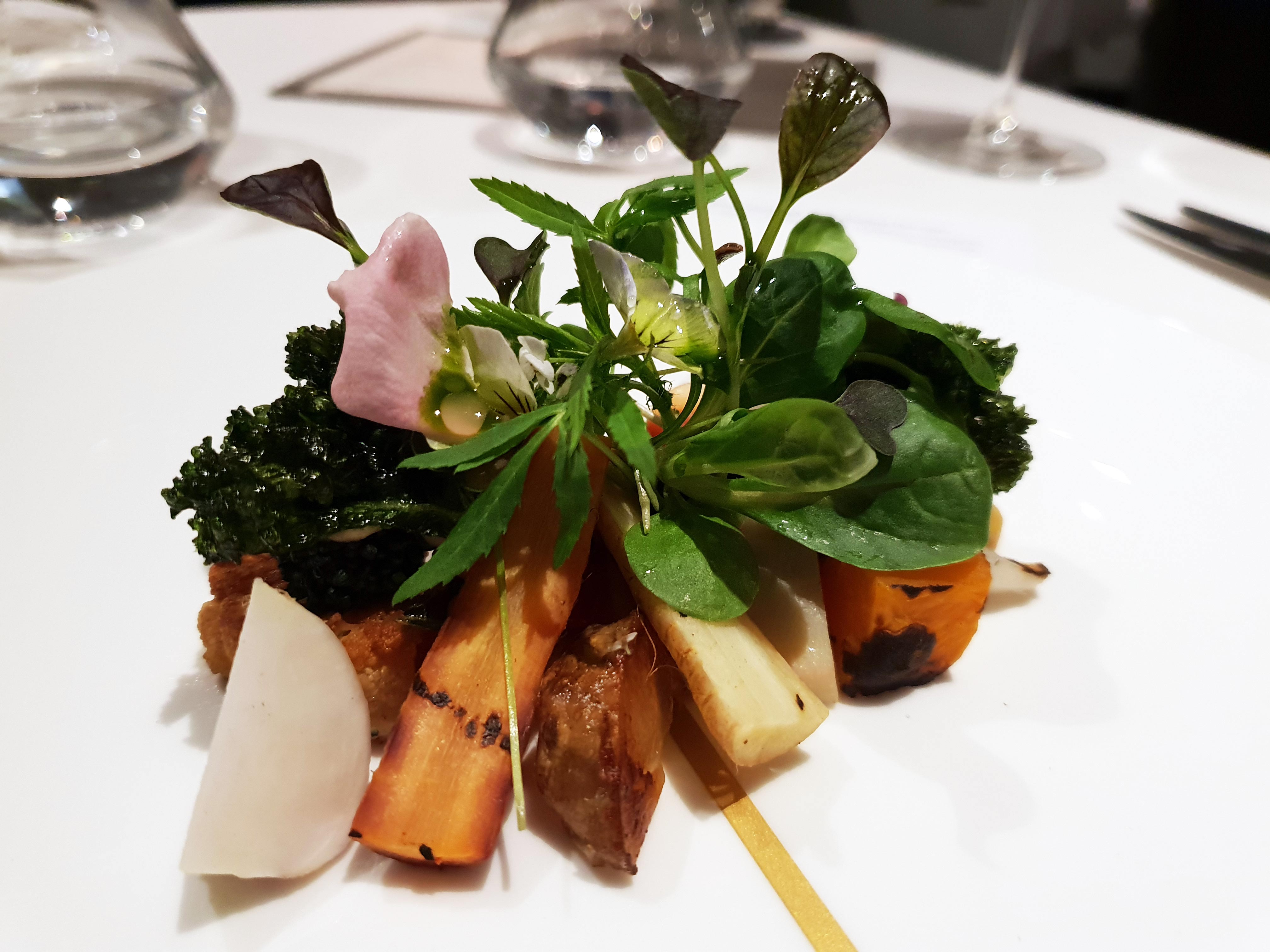 I have always been of the ilk, that if you see me eating a salad, it’s usually a cry for help.  Preceded by a beautiful and precise illustration of the dish with each of the 51 ingredients listed, the Autumn salad which is quite aptly named – ‘Walk Through the Walled Garden’ – leaves me beaming, rather than waving the white flag.

Showcasing seasonal carrot, celeriac, pistachios, kale, lovage, shisho and artichoke, to label a few – the precision of this plate is beyond comprehension.  And while I won’t lie and say it’s my favourite dish of the evening, it provides a pleasant interlude to the meat and seafood. 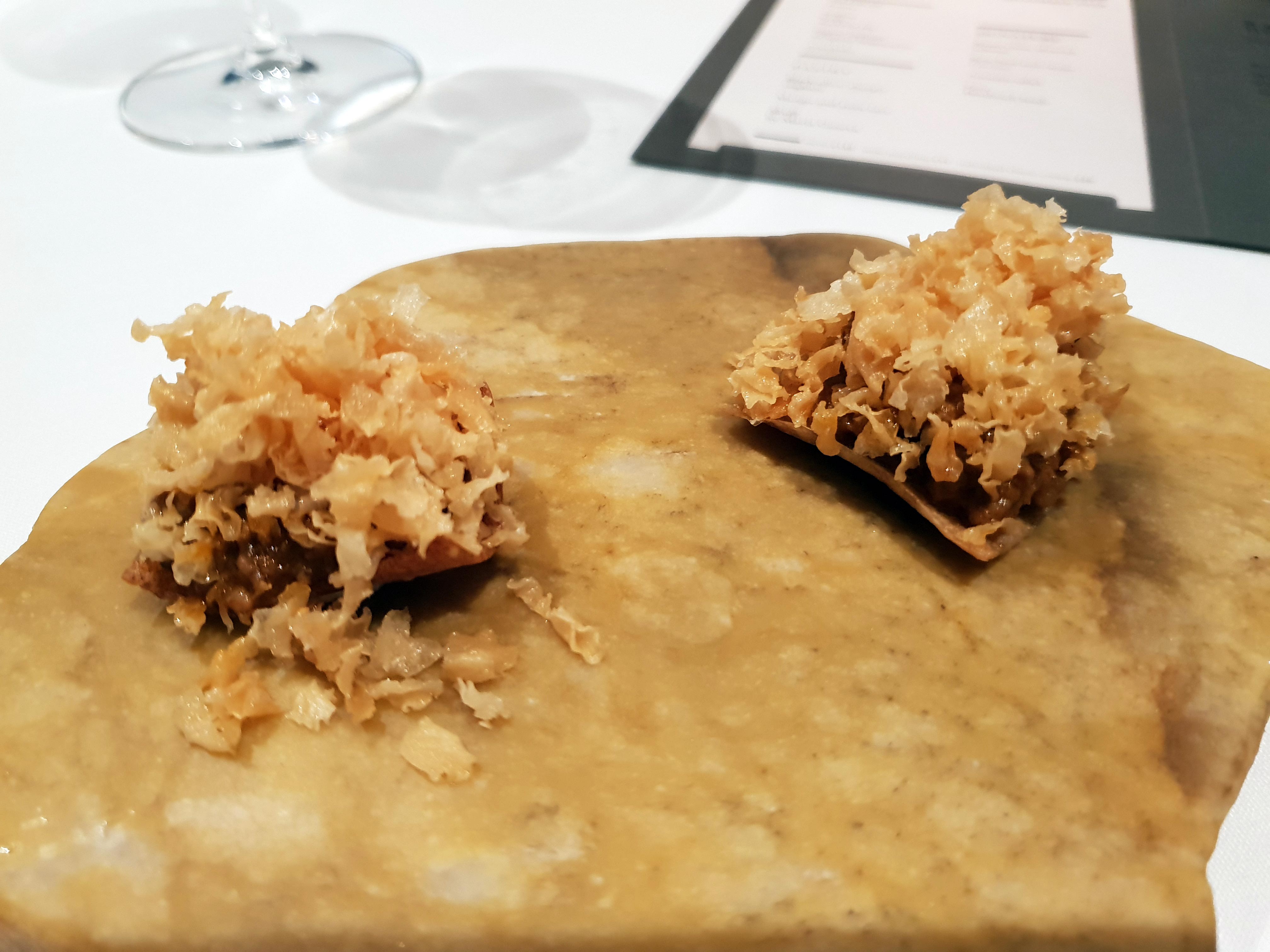 At this point, I’ll readily admit…I’ve lost count.  I’m overcome by the level of consistently, excellent courses appearing; and as it turns out, when I finally regain my ability to count, dish twelve is no exception.  A delicious, savoury bite; a kuzu crisp with ragu, sheeps yoghurt, mandarin and garlic crisps is intense and certainly has the element of surprise. 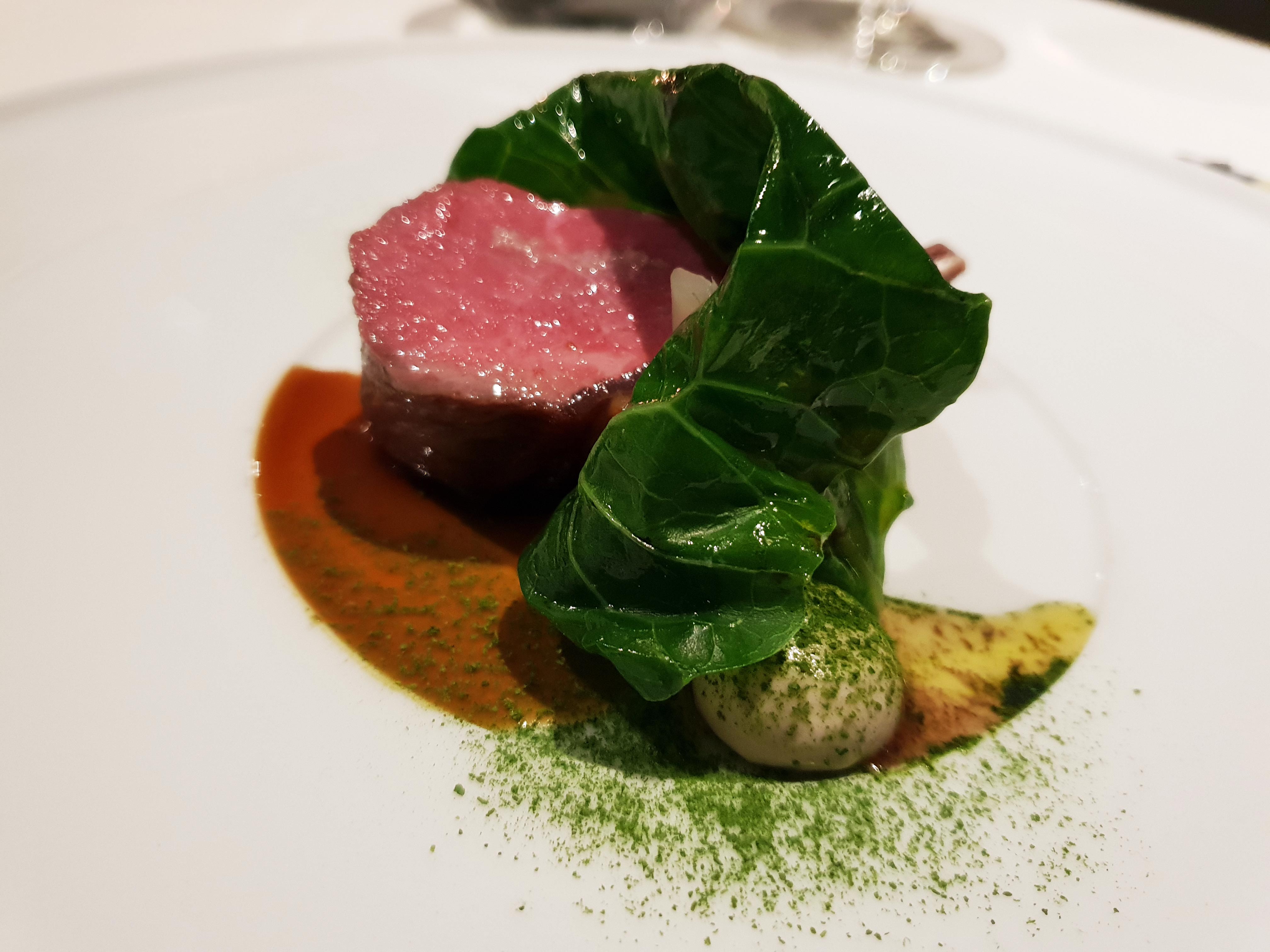 With a great depth of flavour, if I was going to throw in the ‘perfection cliché’, it would be at this point.  A pink cutlet of Herdwick lamb is faultless.  Accompanied with an anchovy purée, black olives and artichoke, the fat is rendered down, there is a slight smokiness and the greens throw in a bitterness.  This is a dish that has been executed with what I can only describe as meticulous precision. 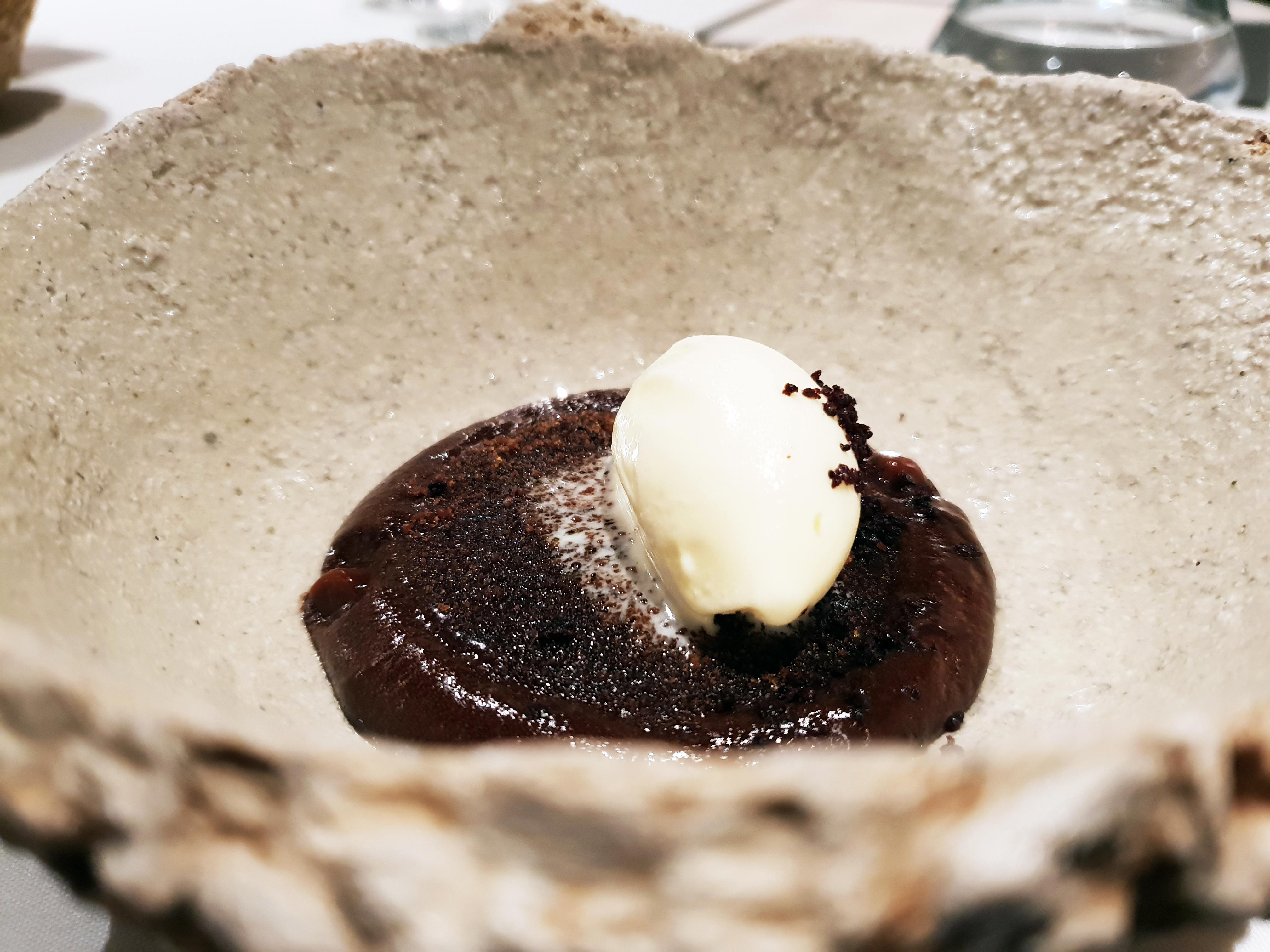 A bowl of warm chocolate mousse is balanced out by creamy sheep’s yoghurt, a salty black olive crumb and a crisp tuille.  I admit it tastes significantly better than it’s descriptor; ‘addictive’ comes to mind.  The downside; it’s a shame that the bowls are something out of Bedrock, for the simple reason, it is nigh on impossible to scrape the remaining chocolate from the base.  Licking chocolate from your fingers in a two-starred restaurant isn’t frowned upon…is it? 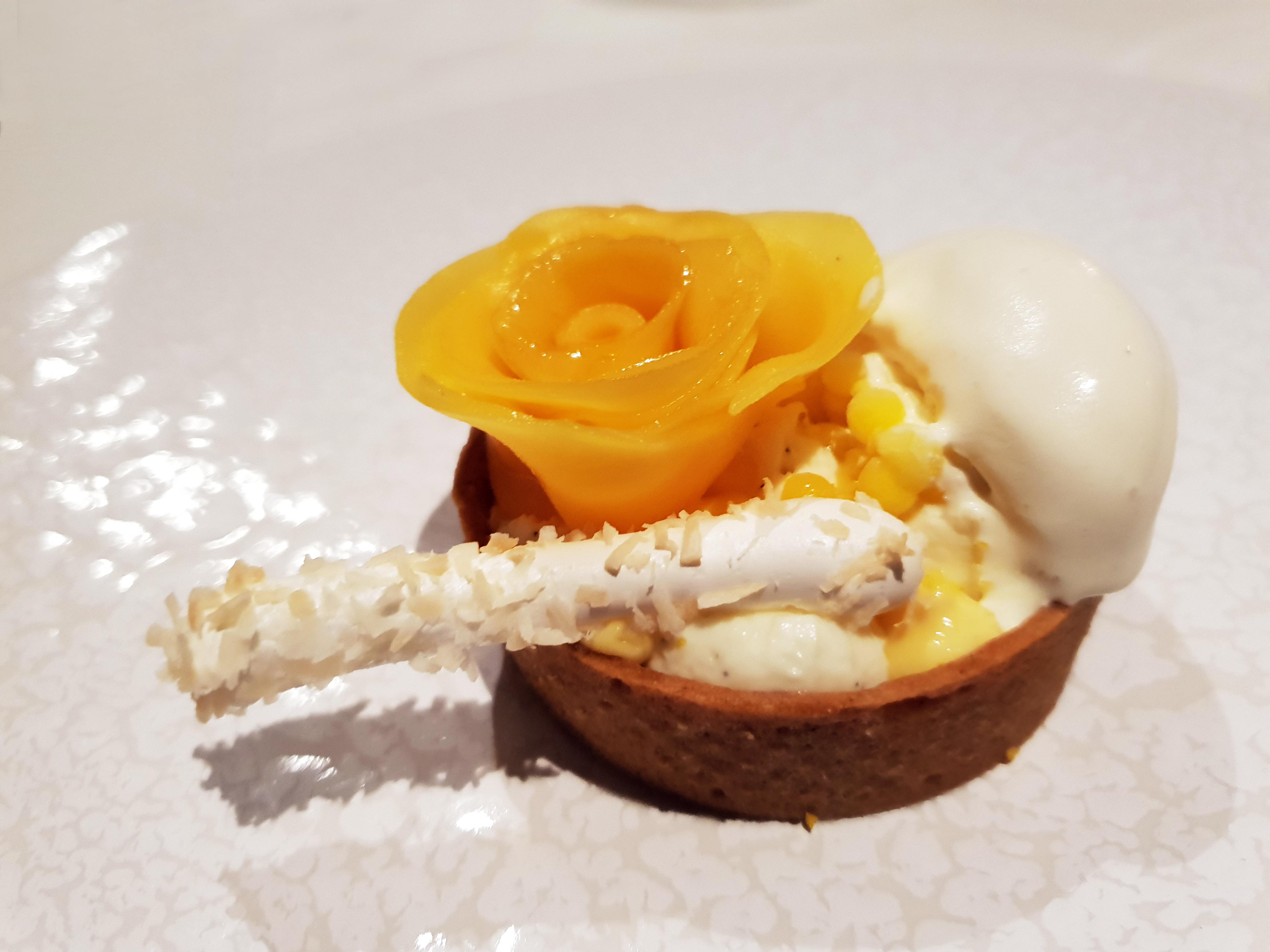 The penultimate course is to be admired, and quite frankly edges on the side of too elegant to eat.  A mango and yuzu tart with coconut ice cream is a fragrant, light and creamy concoction.  Topped with a raw mango rose, it’s an exemplary dessert that passes the GBBO ‘soggy bottom test’ with flying colours. 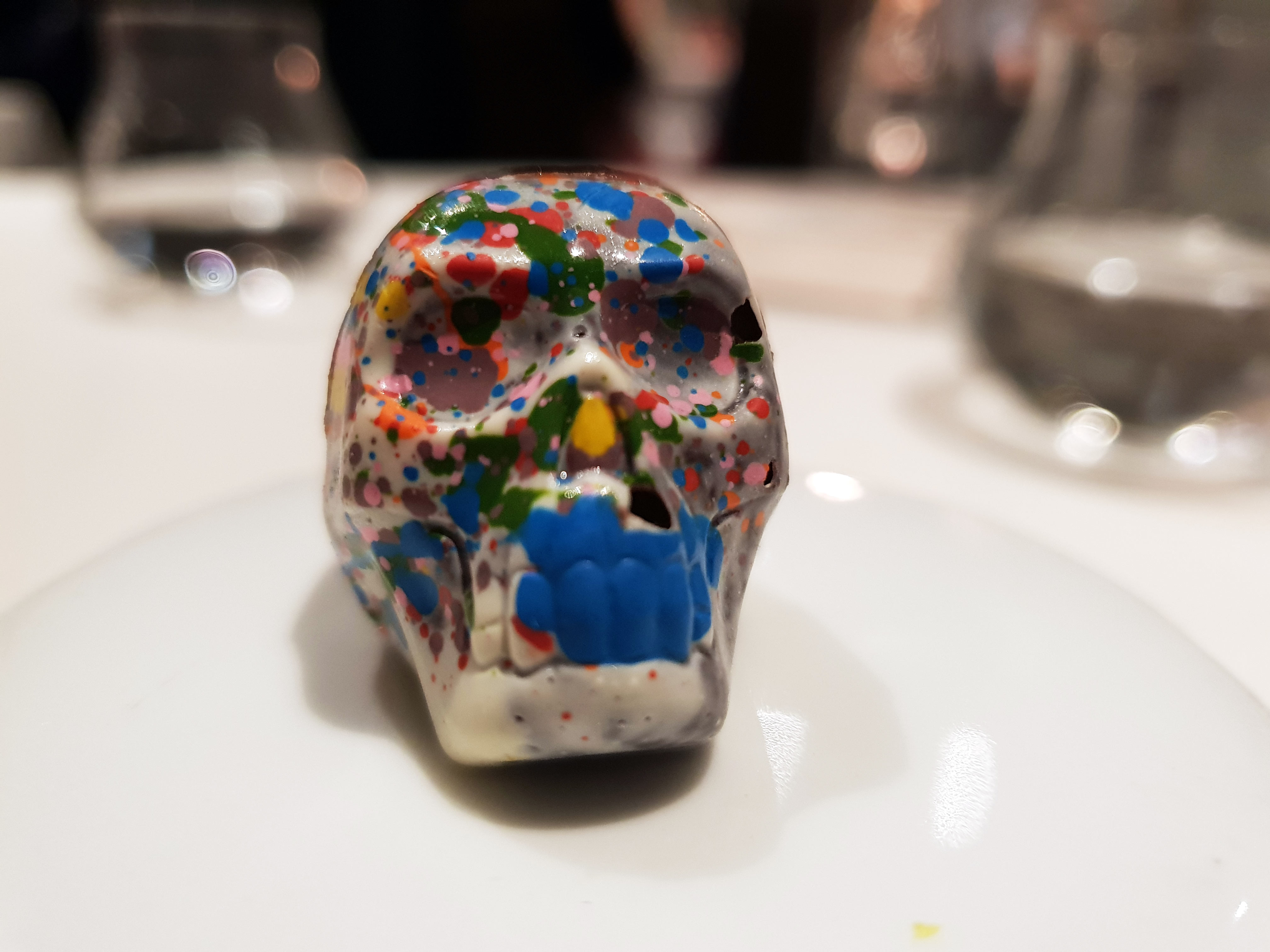 Legendary in itself, the final pastry course is the iconic skull by Chef Maria Guseva.  Containing a smooth chocolate ganache with chilli, lime and corn chocolate – the only words that escape my mouth other than yum, is that it more randomly reminds me of a Tunnock’s Caramel with the pieces of wafer woven throughout.  If I were to split hairs, it needs a touch more chilli; but ultimately it provides the perfect finale to a wonderfully, creative dining experience.

With the conclusion of the final course, as throughout the meal, my thoughts reflect on the originality and creativity of the dishes that have gone before.  And while a quick glimpse of the Raby Hunt Instagram page demonstrates that Chef James Close has dined in, and been inspired by, an array of restaurants across the globe, the tasting menus uniqueness and theatre certainly shines through.

From the plating, to the flow of the menu, and the manner in which diners progress through each of the courses – let alone the dishes themselves; this accomplished dining experience more than reflects the drive and achievements from the past 10 years.  A chat with the Chef himself, and it’s evident his ethos is held by his entire team – ‘perfection-obsessed’.

Up there as one of my favourite meals of 2018, Raby Hunt is clearly worthy of its accolade. Yet while I am all for a gastronomic 600 mile round road trip, I am left questioning why a number of other one star establishments, closer to home, haven’t been rewarded for their efforts.  I guess only time will tell.