It is rare that I debate over writing a blog post, however the sole aim of The Octopus Diaries is to explore and write about my personal ‘dining out’ experiences; and having worked in the industry I am well aware that restaurants don’t always get it right 100% of the time.  We all have ‘off days’; staff don’t turn up, suppliers don’t turn up, customers don’t turn up and just occasionally restaurants do get things a little wrong.  This is how we learn in hospitality, and why I feel customer feedback is always important.

So here we go…my attempt at adopting a constructive feedback approach to a blog post.

After a pleasant dining experience (albeit around 8 years ago), a return visit to La Trattoria in Talbot Green had bee 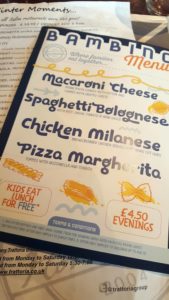 n on the cards for a while.  A well-known and popular, family-run independent Italian restaurant, its reputation in the local area precedes it.  Consequently, when I found out they offered a two course lunch menu including a glass of wine for £12.95, and additionally that kids ate for free at lunch-time when an adult was dining, it appeared to be too good an opportunity not to miss.

While I had made a reservation, it was evident on entering the spacious restaurant that it hadn’t really been necessary as only two others were initially dining.  Following being seated by, I have to say a welcoming front of house team, we were handed menus, which had clearly seen better days.  A creased and stained single sheet of A4 paper, entitled ‘Winter Moments’, and on a sunny day in June, my fears began to build.

Needless to say with a good selection of dishes, and pizza on the menu for the kids, I managed to remain optimistic…until placing my order.  Opting for the prawn and crab cocktail, I was kindly informed that crab was off the menu (to be honest I was a little surprised to even see it on there, at the price they were charging for lunch).  Opting for the ‘prawn cocktail’ instead, I have to say it wasn’t the tastiest of starters – the smallest prawns available, which were watery, and a nondescript Marie Rose sauce, disguised with a handful of salad leaves.

So the starter was nothing to write home about.  But having chosen the slightly alternative ‘surf and turf’ of parma ham wrapped cod with basil and tomatoes, I was hopeful that the main dish could provide some form of redemption.  Regretfully, this was not be – and while the chips were actually well seasoned and very tasty, the cod was overcooked, bland and inedible.  So much so, it went back half eaten, and the dish was deducted from the overall bill. 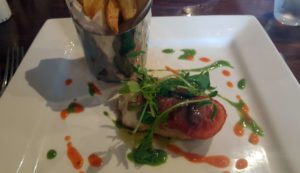 Aesthetically, along with its menu, I think the restaurant itself has seen better days.  Aside from a mismatch of chairs some transparent plastic, others wooden with stained cream covers – Trattoria is unfortunately starting to look tired.  Throw in the peppers which were pickling in jars on the window sill, and quite frankly reminded me of something out of a horror movie, and it’s rare that I find myself so keen to escape somewhere so quickly.  We bypassed the kind offer of dessert, in favour of some white chocolate Magnums that were residing in my freezer at home. 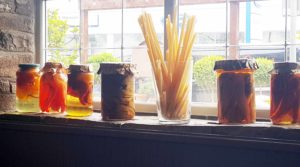 As I mentioned at the beginning of this post, it goes against my nature to really complain about restaurants – it’s ridiculously hard work to run and manage them.  However, irrelevant of whether I’m paying £3.50 for a BK burger, £12.95 for a 2 course lunch or £70+ for a Tasting Menu in a fine dining restaurant, at the very least I expect two basic elements; namely edible food in line with the price I am paying, and I’m a sucker for good customer service.  In the case of Trattoria, customer service was good and with a few tweaks i.e. change of menu design, possibly a look at refining the menu and costings – for example can you realistically provide customers with a delicious and satisfying lunch menu at £12.95 (you should be able to) and removal of the ‘alien autopsy’ jars – it should be onto a winner with its reputation in the locality.

The Jury is certainly out on this one – at the moment it would be a no.  However, that is not to say I wouldn’t return in the future to see whether my experience was just down to it being ‘one of those days’.

Would I recommend Trattoria?

I am going to leave this one up to personal preference – with so much competition around today I would find it difficult to recommend Trattoria, when I know I have had better dining experiences elsewhere.  However, there will be people that disagree with me, and that’s fine.  There are a range of reviews on TripAdvisor so if you’re not a regular, it may be worth doing some research beforehand.